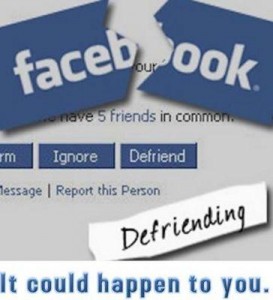 It happened to me

Remember when people would get mad and come up to you or give you a call to let you know they were upset? Sure, there were still people who would simply quit talking to you, but nothing, I repeat nothing, compares to that feeling of despair that comes along with finding out you’ve been defriended on Facebook. Just like that. Cold. No explanation. You get up in the morning, cup of coffee in hand, check your list of friends and… What!? I had 386 friends last night and only 385 this morning? Not the best way to start the day, is it? Someone out there doesn’t think you’re worth it. That’s quite the blow to your ego and self-esteem. It’s even worse when you actually know who took you off their friend list. OMG. How did s/he dare? Even if you expect to be taken off, unfriending someone on Facebook without previous notice it pretty cruel. And if you didn’t expect it, you mighty start suffering form anxiety as you go over and over the last few days with that person, trying to figure out what happened.

Don’t get me wrong, I’ve unfriended some people as well. Just last month I took my old boss from my list. But she was never really my friend, we didn’t hang out, she was just my boss. So when I was getting ready to quit the company, I quit her too. But if you are my friend, a real friend, one that I care for and like, I wouldn’t do that. In every relationship there are ups and downs, good times and times when you’d like to strangle the other person. That’s all part of being friends. And when you have a problem or you are upset, unfriending someone on Facebook instead of picking up the phone to work it out doesn’t seem to me like the best way to solve a problem. Sure, you might end up talking it out and becoming Facebook friends again, but the damage is done. I mean, they de-friend-ed you! It’s like super hard to recover from that, ok?