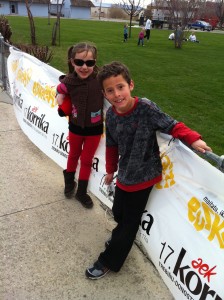 The kids and I are pretty Basque-d out once again after the fun weekend we’ve had. On Saturday we attended the Anniversary Dinner at the Basque Center, which was followed by a dance featuring Amuma Says No. Today we drove to Mountain Home – about 45 minutes from Boise – to take part in the Mountain Home Korrika.

The 3-mile run was organized by Euskal Lagunak Basque Club of Mountain Home, Idaho. About sixty of us came from different parts of the state to participate and support the Basque language. The kids and I arrived at the Mountain Home Basque Park about 1:30 PM, with plenty of time to register before the Korrika started at 2:00 PM. The run was then followed by social hour and a potluck style picnic.

I have to say, I’m really proud of my 7-year old. He wasn’t that excited before the run while we waited for the last participants to sign up and get ready, but once he saw everybody running, he didn’t waste one second to follow suit. He ran the whole 3-mile course and was tired but very proud of himself when he reached the finish line. I had explained to them before hand why we celebrate the Korrika, and Andoni understands how important it is to keep the Basque language alive. On the flip side, our beloved Euskera would die the quickest death EVER if left to Maitane. She “walked” about a half a mile with me before I decided to turn around so we could finish at the same time as everyone else. She’s not the lightest 5-year old I know, and I’m still sore from piggybacking her butt.

But hey! Now I’m all warmed up for the Boise Korrika!