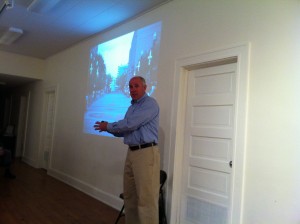 I just came back from the Basque Museum, where John Bieter, Associate Professor in BSU’s Department of History, gave an educational presentation on Basque Migration to the American West. I had never seen John speak before, and I really enjoyed it. The topic was already appealing to me as an immigrant, but John kept it interesting and made it fun by cracking a couple of jokes here and there.

However, what I found most interesting was the setting. If you’d gone into the Basque Museum and seen the arrangements, you’d had thought nothing of it: three rows of chairs made into a semicircle facing a big projector, and a table by the back wall with a plate of cookies, coffee and sodas. About five minutes into the presentation, though, you’d have realized this wasn’t your typical lecture. Hadn’t it been for the small group of Radiology (??) students from BSU, this could have been a gathering of friends and family reminiscing about past times and remembering those who are no longer with us. As John went from one slide to another, it seemed less like a presentation and more like we were going over the pages of an old photo album. It was so cool watching the people get all excited as they pointed out to the familiar face of a relative or friend! Even one of the attendees, Dave Lachiondo, was featured as a child in one of the pictures from the Basque Center’s inauguration.

John gave a general overview of the migration patterns of Basque people and the places they chose as their new home. He talked about the various generations of immigrants and the difference in their goals. He urged us to forget about the present and put ourselves in their shoes. According to him, we are polluted by our current views and we often forget how the first generation of Basque immigrants couldn’t care less about their identity because they were too busy trying to survive. The second generation was concerned with fitting into the American way of life and put aside the customs and language of their ancestors. Finally, the third generation – the one closer to us and the more familiar – started going back to their roots in an effort to revive the culture and language forgotten by their parents.

John wrapped up his lecture with a real life anecdote from his time in Oñati. He told us how the university had printed some T-shirts with “Oñatiko Unibertsitatea” in the front of them, and all the American students were proudly sporting them around town. He was taking a walk one day and he could see this Basque person approaching from the opposite direction. As he got closer, he started to make out the print on the guy’s t-shirt: UCLA.

I guess it’s a human condition to desire what we don’t have. Or maybe we had it once, but we took it for granted. In any case, we miss it all the same.

4 thoughts on “Talk on Basque Migration, by John Bieter”