KORRIKA, the race in support of the Basque language arrived to Boise, Idaho, putting an end to the run for 2011

Korrika came to Boise on Saturday, April 30, marking both the end of this year’s edition of the Basque run and the beginning of a new biyearly tradition in support of the Basque language in Idaho’s capital. This event will join the many already in place in this Western town that promote Basque culture. All proceeds from Boise’s Korrika will go to support US Basque language future teachers that wish to attend a ‘barnetegi’ (Basque language boarding school) in the Basque Country. 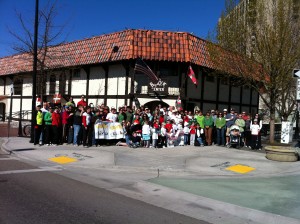 The final leg of Korrika took place in Boise, Idaho on Saturday, April 30th. This run marked the end of this year’s edition of Korrika, an event celebrated every two years to support the Basque language, where participants run across the Basque Country for 11 days. This first instance of the 2-mile run was organized by Izaskun Kortazar, NABO Basque Language Coordinator and Spanish instructor at Boise State University (BSU) and the Basque language conversation group from Boise’s “Kuxkuxeo taldea” (Itxaso Cayero, Geneva Ayarra, Kattalin and Kristiana Berriochoa, Beñat Garaio, Megan Otteman and Henar Chico) . It was made a reality with help from Basque language students (Josu Zubizarreta,  Julie Lliteras, and Toni Berria), professors from BSU (Nere Lete and John Bieter), Basque members of the community  (Sam Snodgrass, the Bieter/Lete family, and Page). The Basque organization Euzkaldunak allowed the use of the Euska Etxea for the event, and Boise’s Basque chef Jesus Alcelay prepared the talos and chorizos that participants enjoyed after the race. Boise´s mayor Dave Bieter, gave a speech before the run, and Ben Monasterio, member of the Oinkari dancers, performed the Aurresku .

The Boise run follows Korrika celebrations in San Francisco, California, NY, and Mountain Home, Idaho. Mountain home had 60 runners. Euzkaldunak opened the doors to the Basque Center at 8 AM, when the first wave of volunteers arrived to set up the registration booth and the tables for a post-race lunch. There was also a table for face painting organized by Boiseko Ikastola, where kids could get a ‘Lauburu’  (Basque cross) or ‘Ikurrina’ (Basque flag) painted on their faces by Mara Davis, Ikastola director. Additionally, there was a table set up with water bottles, backpacks, and Basque-themed postcards for sale manned by the Berriochoa sisters. All proceedings from the Korrika and the merchandise sales will be used to send US Basque language future teachers to a ‘barnetegi’ (full-immersion Basque language program) in Maizpide in the Basque Country.

Registration was set to begin at 9 AM, and Korrika kicked off shortly after 10 AM. Participants started trickling into the Basque Center around 9, and soon the dining room was filled with groups of adults greeting each other and kids running around. A total of 118 people signed up for the run, which makes Boise’s the largest group of Korrika participants in the US. Boiseko Ikastola kids initiated the run with a symbolic relay on Grove Street. The director Mara Davis and the instructors of the Ikastola, Itxaso Cayero and Rosa Mari Arrubarrena, helped the kids. Sofia from the Ikastola gave the “lekuko” to Geneva Ayarra, former director of the Boiseko Ikastola, who gave it to Mayor Dave Bieter. The Mayor gave a speech, and Oinkari dancer Ben Monasterio followed performing an Aurresku while the runners hummed the song. Then the Korrika started and participants left the Basque Center to run or walk the 2-miles from the Basque Center to Julia Davis Park, and back. At the park, Simon, a foreign student from Taiwan, helped the runners and walkers providing them with water and taking pictures. At the race there were many children, among them Patxi Kern’s 9 month old baby and Gina Gridley’s 2 years old twins. This is the second Korrika for the Gridley twins this year.  After the race, everyone gathered back inside the Basque Center and enjoyed a potluck with talos and chorizo donated and prepared by Jesus Alcelay, plus veggies, fruit, cake and refreshments brought by the Korrika participants.

Sam Snodgrass, Toni Berria, Josu Zubizarreta, Henar Chico and Beñat Garaio took pictures and videos throughout the event. Sam Snodgrass will make a Korrika video using this materials and pictures from other Korrika runs in the USA provided by Maitexa Cuburu, from San Francisco, and Koitz, from NY. Izaskun Kortazar will send the video to the Basque Country and NABO Basque Centers.

We would like to thank you to all, Basque and non-Basque participants from Boise, BSU, Mountain Home, etc. for celebrating the 17th edition of the Korrika, and making the first KORRIKA in Boise, Idaho a big success. Thank you as well for supporting the Basque language in the USA.

For pictures and videos of the run, click here.

(You can read a shorter version of the article on EuskalKultura.com.)