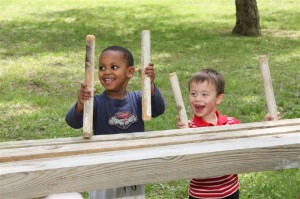 Members of the Washington, DC Basque Club gathered on Saturday, May 7 from the greater Washington DC area at Rock Creek Park, in the heart of the nation’s capital to celebrate their annual Aberri Eguna Picnic. Members joined in this fifth edition of the picnic and enjoyed food, drinks, music and even had the chance to play a homemade txalaparta (a Basque music instrument of wood or stone).

Nineteen members joined in the event, which in the words of Jurdana Izagirre, “was a great turnout when you take into account we are only 33 members in the club!.”

The club provided lomo, chorizos and potato omelet. The picnic started at noon and some members were still having fun at 6 PM.

One of the club members, who is also a musician, brought his homemade txalaparta, so there was live music as well as other traditional Basque Music. There was some singing too, but mostly members took this opportunity to socialize and let the children play together.

The club hopes to recruit more members through these events, and according to Jurdana Izagirre, this year two more families have already joined the club.