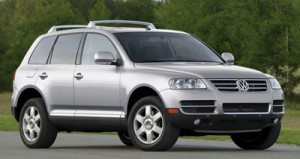 I took my Saab in last week to get the air-conditioning fixed, as my feet would roast very time I drove it, even with the unit turned off. I paid the mechanic $300 and walked out of there thinking I was set. I wasn’t. I had to take it in again because my feet were still roasting. Luckily, it hasn’t been too horrible. It’s already June and we are still wondering when summer will make its way to Boise. But at some point it will, and I didn’t want my feet to melt. I almost had a heart-attack when the guy called to tell me I would have to fork out $2500 to fix the problem. Dude, with Saabs no longer being made I could probably buy the same car again for that price!

So I did a quick search on cars.com in the afternoon, drove over to Lyle Pearson, and thanks to Mark (who sold me the car) and Steve (who gave me a rocking deal on the loan), by 8 pm I was the proud owner of  a new (to me) Volkswagen Touareg. I know! After 14 years I feel a little like I am cheating. It is a well-known fact that I absolutely love Saabs, but I must admit I got used to saying “Oh, I have only driven Saabs since I got my license”, and I refused at times to look at other options just so I could keep saying it. How STUPID is that, right?

That said and stupidity acknowledged, I am hoping this is the last major change I’ll make for a while. Last year was quite the odyssey and I am sick of changes. Besides, I would have to do something drastic to top this one off, like convert to mormonism, buying a Windows PC, or stop using swearwords.

2 thoughts on “Not a Saab girl anymore”