Surely, you’ve seen by now the “Kissing Couple” photo snapped by Getty’s Rich Lam on June 15th, right after the Canucks lost Game 7 of the Stanley Cup against the Rangers. I’m far from being a hockey fan, but I am crazy about soccer and I get the euphoria and devastation that comes along with following your favorite sports team, Athletic de Bilbao in my case.

I haven’t had to experience a riot in a long, long time – since I moved to the US, to be exact, but I did have my share of excitement too with burning buses and people pushing and shouting as they ran by you in the streets of Portugalete every Saturday night protesting against the Spanish government through the Kale Borroka. It sucked because we’d have to either walk from Ortuella to Portu, or spend money we didn’t have to go by taxi. One thing is for sure, demonstrations did not keep my girlfriends and I home from partying. 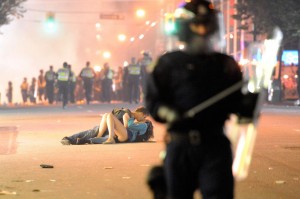 I saw this photo yesterday and I immediately thought “Photoshop”, but I kept reading and turns out I was wrong and the photo is real. I loved it. You couldn’t get a picture like this if you staged it. I spent the rest of the day making up stories on how they ended up kissing on the floor in the middle of a riot, people and police mayhem around them, and they oblivious to it all. Couldn’t they wait to get to their apartment? Did they accidentally run into each other, fell on the floor and – just like in the movies – found themselves face to face and felt the overwhelming desire to kiss? I must confess I experienced a small pang of jealousy when I saw the photo, barely noticeable as it was just for a split second. Then I was back to being more like a young Alanis Morissette. 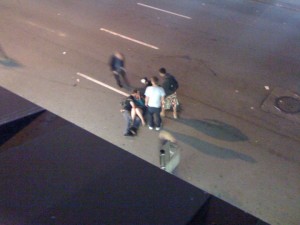 I told myself I wouldn’t google the “Kissing Couple” again to find out who they are and what really happened. Needless to say, I failed miserably and it was the first thing I did this morning. And now I know. Looks like the young lovers are Scott Jones, 29, from the Australian city of Perth, and his Canadian girlfriend, Alex Thomas, a student at the University of Guelph in Ontario. Apparently, the girl was knocked down during the riot and hit her head on the concrete, so her boyfriend rushed over to her aid because she was obviously in distraught. Cute, but not as romantic as I had initially imagined.

Oh well, that’s life for you.

One thought on “Imagination vs. Reality”