When I told the kids’ grandpa about the trip he mentioned it’d be a good idea to get Slug Bug Game – my nephew’s first iPhone app – to keep them entertained counting Volkswagens on the trip to Elko. We got on the road shortly after 3:30 pm on Friday and I realized in Mountain Home I didn’t have the app. No problem. I soon found out that it would have been useless on this trip. I mean, we’d have been happy counting any brand of car, really. I think we crossed a total of three vehicles in the 5-hour drive!

My parents spent the whole trip amazed at the whole bunch of nothingness we encountered from Bruneau Dunes until we got to Elko. My dad was so impressed with the lack of road activity he decided to make his his own app and had this counting game going on during the way back to Boise – the low-tech version. At least until we hit Mountain Home. Hehe.

I’m bummed that we missed the Festival’s kick-off with the “Running of the Bulls”. Luckily, we redeemed ourselves on Saturday afternoon by watching the “Running of the Sheep” at the Fairgrounds, where the Elko youth had a chance to be adventurous. Hopefully, the breathalyzer test required to run from the bulls was not necessary for the sheep event.

What? This is Nevada after all, where people carry their open alcohol containers in the street and drink beer in the car. Actually, many times this weekend that was the only thing telling me I wasn’t in Idaho anymore, judging by all the Boise people I saw in Elko. The Biltoki on Saturday reminded me of the Basque Center during our monthly dinners. 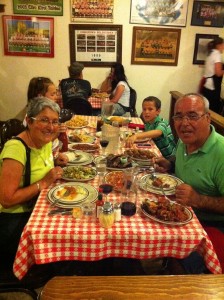 The Biltoki… That place deserves its own paragraph. My friend told me I couldn’t go to Elko and not eat there, so of course I had to go. I wish he’d told me that Ramon feeds you like that was the last meal you were going to have for the rest of the year. The table looked more like an all-you-can-eat buffet than what it really was: a table for 5 at a Basque restaurant. After dinner, we asked our server to bring out the chef, to thank him, on the one hand, and to ask him “what the hell were you thinking?” on the other. He said he will not let anybody leave his restaurant hungry. He’s not joking. I really liked Ramon. He’s had an interesting life and we got to hear some of it on Friday and some of it on Sunday, during the picnic. Like many Basques, he came to the US in 1965 as a sheepherder, stayed and prospered. I asked him about his time on the mountains, expecting to hear about how hard it was and how lonely, but instead he smiled and said it was the best time ever, nobody to bother you and tell you what to do. He promised to let me know when he brings his soccer team to Boise later this summer, but he also swore he had a Facebook and I’m pretty sure he doesn’t know what I was talking about.

Most of the festivities took place on Saturday, starting with the 5K Run at 6:00 am (which I only know because I read it on the schedule), and the Parade at 10:00. We did go to that, and what a nice tan we got while we watched it! So early in the day and so hot already. This year’s theme was “Besarkada Handi Bat For Our Troops” (“One Big Hug For Our Troops”), and Grand Marshall was Nicholas G. Beitia, an Elko Basque who joined the Marines after graduating from high school. We also saw the local Basque dancing group, Elko Arinak, as well as the Triskalariak dancers, from Utah.

After a relaxing break with the kids in the hotel pool – well, more than a pool that was an oversized jacuzzi. You actually had to get out of the water to cool off, and it was about 95ºF outside – we headed to the Fairgrounds to see the dancing, Basque sports competitions and the aforementioned “Running from the sheep”. Then back to the hotel, where I left the kids with my parents and went out with my Boise friends. Let’s just say the following day felt like Sunday after a night out in Portugalete, but with 20 more years and two kids demanding attention. Ufff… Thank heavens for grandparents!

There were also pelota games, a showing of “Amerikanuak” at the Red Lion Hotel, Irrintzi and Jota contests. Unfortunately, there was not enough time for everything. One minute is Friday night, the next minute is Sunday afternoon and we’re eating at the picnic before heading back to Boise.

Luckily, there is always next year. Eskerrik asko, Elko!

One thought on “49th Elko’s Basque Festival, see you next year!”