“Hi, we are camping with the Lurgorri scout group from Ortuella and today we’re doing Survival Day.” (All the hype with the CBS program and we were already on it back in the day.) “We will work for you or clean your house in exchange for food.”

That was more or less our spiel as we moved from one house to the next. A couple of 12 year old girls left alone for 24 hours in the middle of some tiny village in Bizkaia, with no food, drink, or money. Usually people just gave you a sandwich and something to drink without making you sweat it, but there was that one time when “Txiki” Sevilla and I had to work our little pre-adolescent butts off before we could enjoy the lady’s dinner. I know, it was the whole point of the exercise, but somehow it still feels wrong to me. 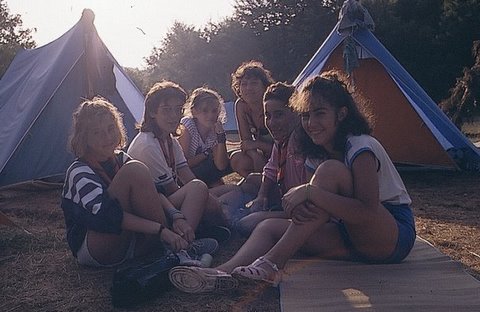 My parents signed me up in the scout group when I was around ten. I will never forget that first day when I got to the meeting place, one Saturday evening. Even though I already knew most of the kids (they were also in my class at school), I remember how embarrassing it was being new and having everyone staring at me during the introductions.

“We’re going to do a play today,” said the group leader. It’s funny how the instructors were only four or five years older than us kids, but they looked so grown up, important and cool. “Why don’t we come up with a story and then you guys pick which character you want to be?” I always made sure I was the narrator in our plays. That way I could participate without having to be up on stage. I was shy, extremely self-conscious about my appearance, as my butt was invariably the biggest one in the group. (Still is, but at this point in my life, who cares.)

Every weekend we’d do a different activity (field trips, games, singing, etc.), and in the summer we’d go for a two-week camping trip somewhere in the Basque Country. The younger kids would stay put in one place for the two weeks, while the older kids left the campsite after one week to go on a travelling camp, carrying the biggest backpacks ever, filled with clothes, the sleeping bag, the tent, and eating utensils. (Remember this happened 25 years ago and we used iron poles to support the tents. Many of them.)

I remember we would walk the whole day to reach a town, set up camp for one night, get up bright and early the following morning just to do the same thing all over again. Seven days in a row. Our chaperons were blister-popping masters by the end of the week.

I thought about those walks the other day while we drove for five hours through the Nevada desert towards Elko and my five year old needed to pee. I’m always happy to stop and go myself; I’m never one to waste an opportunity to go potty. I looked at my daughter after I was done only to find a mixture of awe and disgust in her little face. “Ok, what now?” I ask. She tells me she doesn’t know how to pee outside with no toilet. OMG. How’s is she going to survive Semana Grande in Bilbao?

Obviously, there is no way I could send my daughter on Survival Day unsupervised. I’d hate to make her hold it for so long. And then we have the whole “we were only 12 and had to sleep alone on the church’s portico for god’s sake!” deal. And with no cell phone!

True, “Txiki” and I had a blast. But I got kids now. What the hell were my parents thinking?