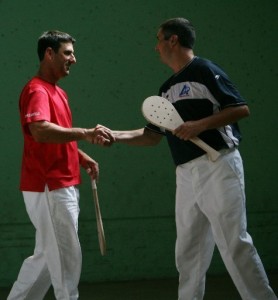 An invitation was sent to all the clubs who participate in N.A.B.O.’s pilota program to distribute to their members. The clubs who wish to participate should email Evelyne Etcharren (N.A.B.O. Pilota Chairman) by August 11th at 12pm. Names must be submitted to the WPC no later than September 9th.

Pending on interest, a selection process will be put in place by August 12th and those interested will be contacted directly by the Chairman with tryout times and location.

Also, the San Francisco Basque Cultural Center will be hosting an invitational this fall. An invitation will be sent out soon and posted on the N.A.B.O. website.

The WPC Fronton & Trinquet tournament program is as follows:

The specialties are as follows:

2 thoughts on “N.A.B.O. to participate in the 2011 WPC Fronton & Trinquet tournament in Bilbao”