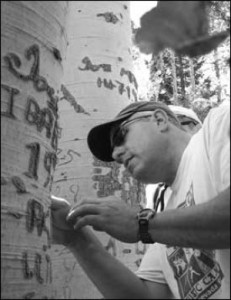 The Boise State Basque Studies Program organized a research trip to the Sun Valley area for the week of August 8-12. BSU History professor Dr. John Bieter is leaving this morning to lead his group into the hills to study and document the arborglyphs, or tree carvings that were made by Basque sheepherders who found themselves with much free time in the high country while tending their flocks. To date, thousands of these carvings have been documented by previous trips made by Dr. Bieter along with Boise State Students, like the one he made in 2006 to the Boise National Forest, in south central Idaho.

John Bieter, PhD, Associate Professor in the History Department at Boise State University, has spent much of his time researching the arborglyphs, or tree carvings, left by Basque sheepherders, who would spend long periods of time with no other company than the sheep in their care. Professor Bieter told The Boise Weekly in 2006 that the tree carvings represent a Basque sheepherder’s way of staving off boredom.

Tree carvings also help track Basque migration patterns across the Western states. A large number of Basque men came lured by the promise of gold in California in the 1850s, but quickly turned to sheepherding when finding the precious metal didn’t work as they had planned. Since then, the carvings started to appear in the Aspen trees of California, Nevada, Idaho, Wyoming, and other western states.

Dr. Bieter and his students from the “Basque Tree Carvings in Idaho” summer seminar already catalogued dozens of arborglyphs in July of 2006. In many cases the only written legacy left by these men, the carvings provide an insight into the solitary lives of sheepherders, into their thoughts and the issues they considered important. The themes range anywhere from political messages, sexual explicit drawings, to simple notes for posterity.

The trip to Sun Valley, Idaho – which is open to the public – aims to keep on researching and cataloguing arborglyphs in the Idaho mountains. Sun Valley is located 151 miles east of Boise.

You can read this article in Basque here.