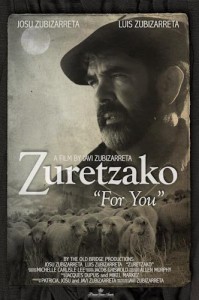 Javi Zubizarreta’s latest work, “Zuretzako” (“For You”), will premiere next Thursday, August 18th, from 7 to 10 p.m., at the Egyptian Theatre in downtown Boise. This will be a one-night-only premiere, so do not miss this opportunity to enjoy a stunning tale of family sacrifice and gratitude. The filmmaker and cast will be in attendance for a Q&A following the film.

Writer and director Javi Zubizarreta is the Winner of the Princess Grace Film Scholarship and Cary Grant Award.

“Zuretzako”, a 60 minute movie which stars Javi’s father Luis and his brother Josu, had the working title “What Aitxitxe Said”, a reference to Javi and Josu’s grandfather Joaquin, the film’s protagonist. Joaquin (played by Luis) was the first Zubizarreta to emigrate to the US in 1935. Zuretzako starts in 1935, but it goes back to 1955 when Joaquin is back in the Basque Country with his family, but must leave them once again. The action then moves to 1975, when his own son Luis (played by Josu) comes to America to herd with him. Father and son must deal with the fact that they haven’t seen each other for many years.

This is a very special event for me. Last winter Josu called and said that his brother was in need of two little kids to film a goodnight scene for “Zuretzako”, and whether I’d be willing to loan him mine. Of course, I said yes! The kids were a little shy at the beginning, but Javi was awesome and by the time they finished filming Andoni and Maitane were already asking when they could do it again, but this time with words (they pretend to be asleep in this scene).

Back in April, Notre Dame University premiered the movie and invited Josu to take part in the event. Neither Josu nor Luis are professional actors, which makes the film that much more special. I got a hold of Josu who told me about this remarkable experience of starring, along with his dad, in a film directed by his brother. 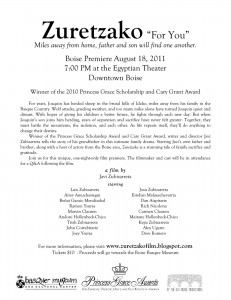 Henar: Josu, how did you decide to attend the film’s premier?
Josu: Notre Dame invited me out on Tuesday and I arrived on Wednesday. It was really great! They had reserved the school’s theater and was packed, with over 100 people in attendance. Many of the guests were from Javi’s dorm, there were also film professors; even a PhD student from the Basque Country and a professor from Pamplona came to the premiere. Popcorn and drinks were sold too. It felt like we were in an actual movie theater ready to watch a blockbuster film! Prior to starting, Javi’s adviser spoke and shared his thoughts on the film. Later, Javi thanked everyone who helped and attended the event. Then the movie began.

Henar: What did you think of the premiere?
Josu: I was really nervous; I honestly can’t say I remember it well. Considering we finished the final scenes the night before, I didn’t know what to expect.  I think it turned out well though.  After the credits, the audience gave Javi a standing ovation!! We had some Q&A time where the audience asked questions to both Javi and I. I was really embarrassed and nervous. However, the questions and comments were nice, from how it will be perceived in the Basque Country to whether the DVD extended version will include more lamb birth shots.

Henar: How was the rest of the visit? What did you and Javi do?
Josu: After we cleared out, Javi’s adviser took us all out to Legend’s, Notre Dame’s dance club/bar/restaurant. It was really nice of him. We felt very lucky and blessed for the whole event. I think Javi didn’t expect such a nice turnout and response from everyone.  Later, all of Javi’s friends and I went out to celebrate. It was a great experience, I was really proud to be here to watch it all.

If you would like to see a preview, go here and click at the end of the article. It will send you to the iTunes download page, where you will choose number 11.