The best thing about working at Hewlett-Packard (other than solving the world’s digital press software problems and Patty and Todd), is listening to KBOI while I drive to work. I used to listen to them every morning on my way to well, Hewlett-Packard, my first time around, a lifetime ago. Then I moved to Chicago, then had the kids, then I started with my translation business. And even though I thoroughly enjoyed working from home, my heart aches when I think about all the stories I missed by not listening to the Morning News.

Like the petition urging the creators of Sesame Street to marry Ernie and Bert.

At first I was with Paul J., thinking about the children and the look of surprise on their little faces when the wedding scene came along. Then I thought about my own kids and how the world is not like it was when I watched “Barrio Sésamo” as a kid in the Basque Country. Just last night I was out with a friend who told me about having to confiscate his 12 year-old’s cell phone because the boy was texting back and forth with this 12 year-old girl at two in the morning! And she’s sending him sexy pics and telling him how hot he is. Did I mention they are 12?

My kids are only 6 and 7, but even they already know about people dating other people of the same sex, and I’m fine with that (at least someone’s dating!). They like Freddie Mercury and they wanted to know all about him, so I took the opportunity to talk to them about gay people and I made sure they don’t see it as something weird, wrong, or shameful. Love is love.

Back to Ernie and Bert, though. They’ve been roommates for more than four decades, you never see them out with girls, they bicker like an old married couple, and there are like a million pictures of them together. Quite telling, if you ask me. 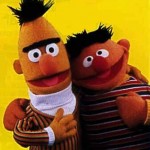 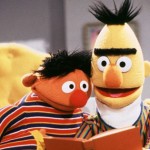 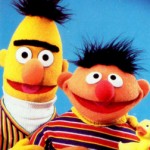 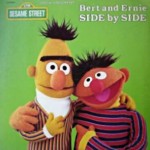 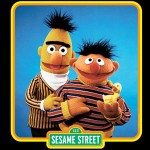 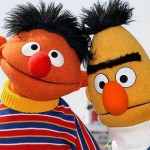 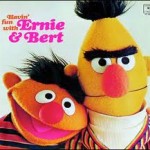 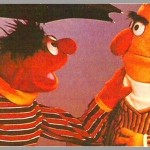 The producers of the show will never have a wedding ceremony for Ernie and Bert, though. According to them,

Even though they are identified as male characters and possess many human traits and characteristics (as most Sesame Street Muppets™ do), they remain puppets, and do not have a sexual orientation. Bert and Ernie are best friends.  They were created to teach preschoolers that people can be good friends with those who are very different from themselves.

There you have it, there is no way Ernie and Bert tie the knot (Puppetism?). I wonder who owns the house, or if they have joined checking accounts, what rights will one have when the other one dies. (What state are they in, by the way?) After 40 years of living together, I hope they’re at least considered a common-law couple.