Last week I wrote about the Thursday premiere of “Zuretzako”, a film by Boise Basque Javi Zubizarreta starring his dad Luis and his brother Josu. Today, Boise’s main newspaper, The Idaho Statesman, is running an piece on the Zubizarreta boys. 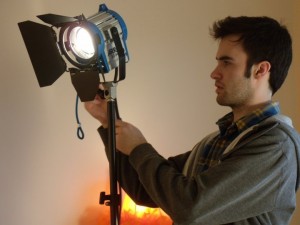 They called him “Aitxitxe” (pronounced eye-chee-cha), a Basque word for grandpa, the stoic man whose memory reverberates through the generations. But Zubizarreta and his brother Josu — the J’s are pronounced like H — never knew him.

“He passed away before we were born,” Zubizarreta says. “He was a hard worker and left his family behind so they could have a better life. He is responsible for so much of my life, I just wanted to know more about him.”

So, last fall, Zubizarreta, 23, made his first feature, “Zuretzako: For You,” as a tribute to his aitxitxe. The movie, in Basque with English subtitles, is a fictional account of Joaquin Zubizarreta’s life.

After the Thursday night screening, Zubizarreta and the rest of the cast will speak and answer questions.

Zubizarreta started making films as a kid — silly comedies, mostly, and send-ups of popular movies. When he decided to major in film at the University of Notre Dame, he turned to his rich Basque heritage for inspiration.

His first big project was “Artzainak: Shepherds and Sheep,” a documentary about Basque shepherding in Idaho. The film won critical praise and was shown in Boise and in the Basque Country.

Because of that film, and the recommendation from one of his professors at Notre Dame, Zubizarreta won the Princess Grace Foundation’s Cary Grant Award in 2010. It allowed him to shoot the hourlong feature about his grandfather in October in Boise.

Zubizarreta connected with his grandfather’s story when he interviewed his father and uncle for “Artzainak.”

“They talked about how he was a man of few words,” Zubizarreta says. “I’ve always been drawn to characters like that. I wanted to know more about him and tell his story.”

In “Zuretzako,” Zubizarreta’s father, Luis, plays Joaquin, and Josu plays both Joaquin as a young man and their uncle Jose (who goes by Joe Zubizarreta today).

Joaquin Zubizarreta moved to Mountain Home in 1923 and worked 18 years in a sheep camp. He never once went into Boise, his grandson says. He returned to Spain in 1941 to start a family.

He opened a shoe store but it failed, and he returned to Idaho in 1955 for another nine years. Eventually, his son Jose joined him in the early 1960s for one year.

“That was a difficult time for my grandfather,” Zubizarreta says. “He had given up so much so his family wouldn’t have to work in this life that is so difficult and awful.”

That one year is the heart of this film, with a father and son who barely knew each other living in an isolated sheep camp trying to connect.

The film tells the story in a series of vignettes that span the 1930s to the 1970s. It ends with Joaquin Zubizarreta returning home to his family, including Luis, who was 13 at the time, and Jose going off to Boise Junior College. Jose Zubizarreta taught Spanish at Borah High School for many years. Luis moved to Boise in 1975.

Zubizarreta — with the help of his brother and father — translated his script into Basque, which was a challenge for Josu, 26, who is just learning it.

“We would read it phonetically, and our dad was there to help,” he says. “It was hard to have that natural flow, and my accent is definitely American.”

Josu Zubizarreta, 26, who will finish his master’s degree in public health at Michigan State University in May, has no ambition to become an actor. But working on the movie turned out to be an invaluable experience — and not just because it brought this close family closer, he says.

“It helped me to appreciate the sacrifice my grandfather made in coming here,” Josu says. “And to think about my life, and how I need to strive and work as hard as my family does.”

Both Zubizarreta brothers plan trips to the Basque Country. Javi is applying for a Fulbright Scholarship to study filmmaking; Josu is looking into Basque language immersion programs while he finishes his master’s degree.

The original article can be found here.

2 thoughts on ““Zuretzako” in the Idaho Statesman”