As you know, I took the kids to Mountain Home for the Gurea Workshops at the beginning of this month. The class was great, but I got a little bummed out when I saw the cars parked outside the Center. The Basque license plate looks so cool and yet, the program didn’t make it and the plate is going away. 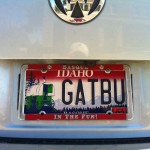 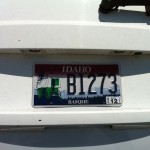 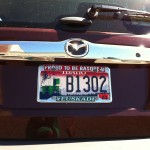 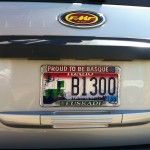 The license plate that honors Idaho’s Basque heritage and raises funds for the Cenarrusa Foundation for Basque Culture will no longer be an option for Idaho drivers. Already in 2009, the Foundation was notified by the ITD that the plate might be discontinued if more applications were not received by the following March.

This Idaho license plate featuring a sheep camp on the left and “BASQUE” written at the bottom had been available to Idaho drivers since January 2006, when then Idaho’s governor Dirk Kempthorne made it official by signing the decree accompanied by Carlos Bilbao, the Emmett representative who lead the program, Pete Cenarrusa, former secretary of state, and Ben Ysursa, already secretary of state at that time.

The initial cost for the plate was $35, which would drop to $25 when the plate was renewed. These fees were in addition to annual vehicle registration, county and plate fees. The Cenarrusa Foundation for Basque Culture received $25 for each new plate and $15 from annual renewals. The Foundation would cycle the money back out to support Basque programs all over the state through annual Community Grants.

Examples of the projects they supported with this funding were dance costumes for the Gooding Basque Club’s children’s group, funds for AV equipment storage in Homedale, for exhibits, tuition assistance, or cable for live broadcasts of games in the Fronton in Boise.

New plate programs get a three-year introductory period with no minimum sales requirement. However, if sales, including renewals, fall below 1,000 in any two consecutive years, ITD is required to eliminate the plate. Only military plate programs are exempt from the sales threshold.

I’m so not looking forward to renewing mine and having to part with it.