My friend Zigor Alkorta called me last week, and through Viber, no less! I can’t believe the progress he’s made in the last five minutes technology-wise. He could barely work the cell phone last time I saw him, but since April he’s managed to get a Blackberry (or Droid, or some smartphone that’s not an iPhone) where he now has Viber and Whatsapp installed. Not only that, but he finally opened a Facebook account (just to follow our high school reunion plans), a Tuenti account, and I can’t say for sure, but he might even have Twitter.

Back to the call. He works as a photographer for Basque newspaper Deia, and he asked me to write a small article on how we enjoy Bilbao’s Aste Nagusia those of us who live abroad. I thought it was cool he thought of me, and I said of course I’d write it. But then I hung up and I started freaking out because, other than with a lot of jealousy, I hadn’t thought about how exactly I live Aste Nagusia from Boise. But once I got down to it, writing about it wasn’t as hard as I’d originally thought.

I’m not going to lie; it was pretty cool to see the article published in today’s edition of the paper. You can read the original article in Spanish by clicking on the picture. 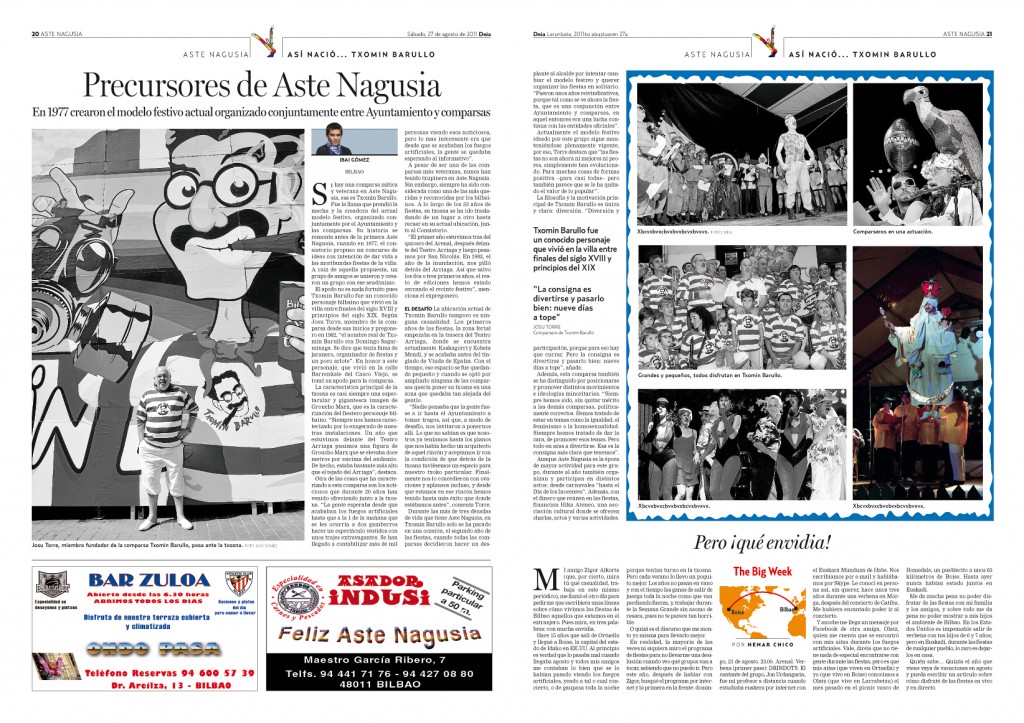 My friend Zigor Alkorta (who by the way, works for this very newspaper), called me the other day to ask me to write a couple of lines on how we enjoy Bilbao’s Aste Nagusia those of us who live abroad. I’ll tell you how: with a lot of jealousy.

It’s been 15 years since I left Ortuella and came to Boise, Idaho’s capital in the USA. At the beginning it’s true I had a bad time when August rolled around and all my friends told me how much they’d enjoyed watching the fireworks, going to this concert or the other, or partying the whole night because they had to work on the beer booth. But every summer it gets a little better. Time takes its toll and I don’t feel like partying the whole night through anymore, and working during Aste Nagusia without the slightest hint of a hangover doesn’t sound too horrible.

Or maybe that’s the spiel I tell myself to feel better.

Really, most times I don’t even look at the schedule of events to save myself the disappointment when I see which groups are playing and I know I can’t go. But this year, after I talked to Zigor, I looked up the program on the Internet. It couldn’t have started worse: Sunday, August 21. 23:00. El Arenal. Night concert (first pass): Drindots. The group’s singer, Jon Urdangarin, was my remote teacher while I studied Basque online with HABE’s Euskara Munduan program. We would email each other and talked through Skype. I met him in person by chance about three years ago in Morga, after a Gatibu concert. I’d have loved going to the Bilbao concert.

And last night I get a Facebook message from another friend, Olatz, who tells me she run into my parents during the fireworks. Fine, you’re going to say there is nothing special about running into people during Aste Nagusia, but the thing is that my parents (from Ortuella) and I (from Boise), met Olatz (from Larrabetzu) last month at the Basque picnic in Homedale, a little town about 40 miles from Boise. Until yesterday they hadn’t been together in the Basque Country.

I feel sad that I can’t enjoy the week with my family and friends, and I’m especially sad that I’m unable to expose my kids to Bilbao’s atmosphere during Aste Nagusia. In the United States it’s unthinkable to take your 6 and 7 year-olds partying with you; but in the Basque Country, during any town’s festival, it’d be weird to leave them at home.

Who knows? Maybe next year I’ll go on vacation in August and I’ll be able to write an article on how I enjoyed Aste Nagusia live.

10 thoughts on “How do I enjoy Aste Nagusia from Boise?”