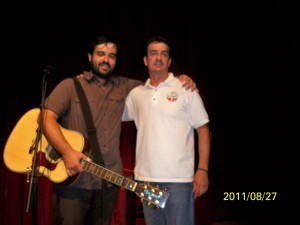 Despite nature’s efforts to sabotage the Basque weekend, the Rhode Island Basque Club enjoyed a wonderful picnic and a concert on Saturday.  The picnic was held Saturday instead of Sunday due to the Hurricane Irene hitting the east coast. On Saturday Fermin Elexpuru and Ismael Biurrun cooked paella for 70 people, followed by a wood chopping demonstration by Juanmari Aramendi.  The original competition between two aizkolaris from the Rhode Island Basque Club, Juanmari Aramendi and Riki Lasa was postponed until their next demonstration in Montreal, Canada September 17th.

Saturday evening, following the picnic, Urko Menaia performed at Portsmouth Abbey School.  The concert was well attended; the members of the Basque Club and Portsmouth residents sang along and enjoyed the Basque troubadour and poet in his last concert of his North American tour.

Additional photos of the event can be found on the Rhode Island Basque Club’s website.