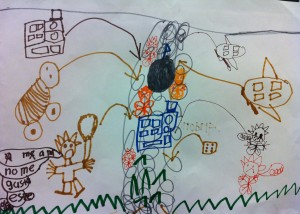 I’m not sure how we got onto the subject, but somehow the kids and I ended up talking about the events of 9/11 on the way to school yesterday morning. Trying to explain the inexplicable to a 6 and a 7 year old is almost impossible, so I told them I might be able to find some videos on YouTube for them after school. I immediately regretted it and hoped they’d forget about it by the time the bell rang.

Right. It was the first thing they asked about when I got home from work.  My personal rule is to make good on whatever promise/threat I utter, so I had to follow through. Like that time at Café Olé a couple of years back , when I told Maitane she better stop her whining or I’d throw her doll in the trash. We went home minus one doll. Another rule of mine is that if they’re asking about it, they deserve an answer. Like that other time, when Andoni kept asking about getting out of amatxu’s belly. Just how the heck did he manage that? He asked me everyday for almost a month. And everyday I’d tell him, I’d try different ways of describing his birth, but he had a difficult time visualizing it. So I opened my Mac and showed him the video. That must had satisfied his curiosity entirely because he never mentioned it again.

I loaded the kids in the car, drove to Moxie (my favorite local coffee shop along with the Flying M), bought each of them a muffin, and showed them the videos. First I found the one where the towers disintegrate and come crashing down like they were made of sand and did not stand 110 stories high. Then I had to look for the video of the planes smashing into the towers so the kids could better understand why the towers fell. If I was going to show them, I might as well do it thoroughly.

I didn’t expect to break down in front of my kids. I’d seen those videos hundreds of times, from all kinds of angles and in three different languages. And yet, as I watched the footage for the umpteen time and tried to recount the events in terms that my kids could understand, I lost it. Maitane looked at me bewildered and then started crying herself, asking whether there were any plane-crashing bad guys in Boise. Andoni kept saying, more rhetorically than anything else, “and the bad guys didn’t even care they were going to die! How couldn’t they even care they were going to die?”

At first I wasn’t sure I did they right thing by telling them what happened and how many people died. Then I thought, but it happened. It was horrible, but it did happen. Many children had to suffer the consequences of the attack and most likely, they will never stop suffering them.

I’d love to shelter my kids from ugliness forever, but life, as wonderful as it is most of the time for most of us people, can also suck. I want my kids to know that life is not always fair, and there’s nothing you can do about that.

One thought on “The bad guys… they didn’t even care!”