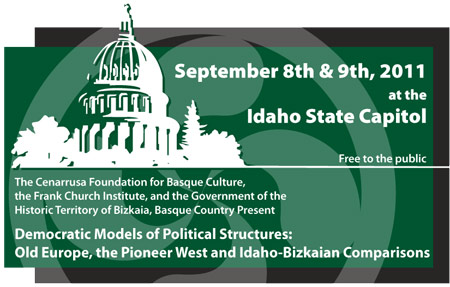 Last week, the Cenarrusa Foundation for Basque Culture and the Frank Church Institute together with the Government of the Historic Territory of Bizkaia, Basque Country, jointly presented a two-day symposium on “Democratic Models of Politcal Structures: Old Europe, the Pioneer West and Idaho-Bizkaian Comparisons”.

As much as I’d have loved to join in both days, I couldn’t make it on Friday because of work, but I was able to attend Thursday’s session, “An Overview of Basque Country Reality: Economic, Political and Civil Rights” by Dr. Aitor Esteban Bravo, Representative of Bizkaia to the Spanish Parliament and Constitutional Law Scholar. Dr. Esteban Bravo started with a brief overview of Basque Country’s history and the origins of Basque, and then went over its economic situation, education system and the comeback of Basque language. He also talked about the different status the Basque Country with respect to Spain thanks to the fueros.

Clearly, one hour is hardly enough time for anything more than an overview, as the title indicates. With everything, the audience enjoyed a crash-course on how the tax system works and learned about self-governing Basque institutions, such as public health (Osakidetza) and the Basque police service (Ertzaintza), amongst others.

Friday session included presentations by several prominent scholars (both Basque and from the US) such as Dr. Jon Arrieta Alberdi. Professor History of Law, University of the Basque Country; Dr. David Adler. Director, Senator James McClure Center for Public Policy Research, University of Idaho; Dr. Aitor Esteban Bravo. Representative of Bizkaia to the Spanish Parliament and Constitutional Law Scholar; Dr. Gary Moncrief. Boise State University. University Distinguished Professor of Political Science, and University Foundation Research Scholar; Dr. Susana Serrano Gazteluurrutia. Professor of Public Law. University of the Basque Country; and Dr. James Weatherby. Emeritus Professor and former Chair of the Department of Public Policy and Administration at Boise State University. Former Executive Director of the Association of Idaho Cities and member of the Board of Directors of the National League of Cities.

It would have been nice to see a larger turnout on Thursday. As Basques living in Idaho, particularly in Boise, we are extremely lucky to have access to so many events and resources about Basque culture, language, and traditions. Organizations such as the Basque Center and the Basque Museum do a great job keeping the music, dancing, and history alive. Others, such as the Basque Studies Program at BSU or the Cenarrusa Foundation allow us to experience Basque culture in a little bit different way, through arborglyphs research trips, culinary events or politically-oriented workshops, such as last week’s two-day symposium.

There is always something interesting about the Basques going on in Boise. If you’d like to find out what’s happening next, check out this list of websites which offer up-to-date information on anything Basque.