I wrote this entry last year, on the 10th anniversary of the 9-11 tragedy. A year later, one more anniversary, the kind you wish you’d never have to remember. 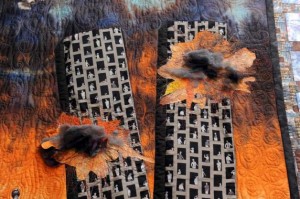 I hadn’t planned on writing about it, you know, where I was on 9-11 ten years ago, but then Pedro J. Oiarzabal asked.

I arrived to the call center at 7 a.m. sharp. I was working for the Macintosh group at Hewlett-Packard doing software tech support on Laserjets and DesignJets. Mac OS 8. Building 28, Kimball Plaza on Emerald St., near the mall.

Mike messaged me at 8:00 A.M. and told me about the first twin tower being hit. “The what tower?”, I was drawing a blank. I didn’t know what that was, or where. “The World Trade Center in New York,” he said. I remember going to Yahoo.com to “google” it but all I got was a “Server busy” error message. Only 15 minutes after the attack and already all search engines were on overload.

After that, all I remember is total disbelief for the next several weeks, a sense of fear, uncertainty and anger, and thousands of American flags stuck to the windows of every car but mine. People trying to make sense of the absurd.

Today, I am back at Hewlett-Packard. OS X. Building 7, Main site on Chinden Blvd. The printers I support are 10 times bigger but 75% of my team remains unchanged. I’m minus one husband and plus two kids. I still drive a European car, but it’s not a Saab anymore. And I’m still unable to wrap my mind around what happened.

Ten years later everything is the same, but totally different.

6 thoughts on “Eleven years ago”