John Bieter will present “Aukera: A History of the Basques in Idaho” on Thursday, October 20 2011, at 7:30 pm, at Idaho State University.

This audio-visual presentation on the history of the Basques in Idaho is built around a Basque application of Marcus L. Hansen’s “Law of Third Generation Return.” In short, what the son wishes to forget, the grandson wishes to remember. Bieter focuses on each of these generations and the organizations that they established, and what they felt they needed at that time in Idaho. While many may know about the Basques in shepherding, Bieters’ generational research offers a fresh perspective. He first examines the immigrant generation (from 1890 until the early 1920’s), then focuses on the Basque-American generation (from the 1920’s until about 1949), and finally looks at the American-Basque generation (from about 1950 to the present). Each generation has a different perspective to their culture and a different experience in Idaho. 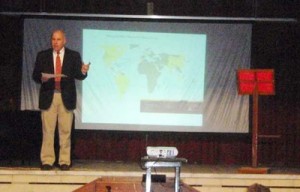 Professor Bieter graduated from the University of St. Thomas with a degree in Social Science and a concentration in Economics. He completed his Masters degree at Boise State University and his thesis was published as An Enduring Legacy: A History of the Basques in Idaho, where he and his brother Mark chronicle three generations of Basque presence in Idaho from 1890. John earned his doctoral degree from Boston College where he focused his research and teaching interests on Immigration and Ethnicity, the American West, and American Catholicism. Currently, John serves as an advisor for pre-service educators in the College of Social Sciences and Public Affairs and as Director of the Center for Basque Studies. He is associate professor in the history department as well.

Last April, John Bieter gave a talk on Basque migration at the Basque museum in Boise, and just this August he led a group of students into the hills of Sun Valley to document the arborglyphs, or tree carvings,  made by Basque sheepherders during the 19th century.