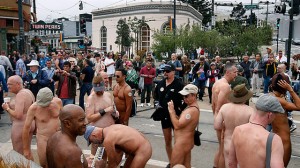 A PG rated-R pic, how cool is that?

Apparently, if you’re going to San Francisco, be sure to ONLY wear flowers in your hair. At least that’s the only thing some people were wearing on Saturday during the rally to protest against tighter nudist laws. A proposed legislation (by S.F. supervisor Scott Wiener, haha) is making its way through the city government to limit how and where nudists can sit publicly, according to the AP. There are currently no laws prohibiting nudity in the city, so long as it is not in the form of  “lewd” behavior.

First of all, I must confess my ignorance regarding this issue. I didn’t realize one was free to walk naked around San Francisco without getting arrested. I’d love to pick on the state of Idaho and their mostly conservative population, but I’m pretty sure you’d get arrested too if you dropped your pants or show your boobs in the middle of the day in Bilbao’s Casco Viejo, the old part of town. (You’d probably be OK doing it at 4 am, though. Nobody would remember the next day anyway.)

I was listening to some of the spectators’ opinions about the protest, and although one woman taking her daughter to a children’s function did walk a little brisker through the park, most didn’t care that much about a bunch of not-so-hot-looking naked guys in the middle of the street.

Neither would I, honestly, unless I happened to walk by with my oldest son. You don’t know him, but he’s seven and his favorite pass-time is finding out who is taller, shorter, fatter, older, has more muscles, is more famous, faster, cooler… You get the point. Just yesterday Boise’s Mayor happened to pull in behind our car as we waited for the light to turn green and my son spent the next ten minutes grilling me about whether he was rich, was he more famous than the president, why, how many mayors were there in the US and was Boise’s richer than the other mayors. Can you imagine if we go by that park with all the nudists literally “hanging out” and what types of questions he could potentially ask me?

I just became pro “let’s-get-these-people-some-clothes-right-now” kind of liberal all of a sudden.