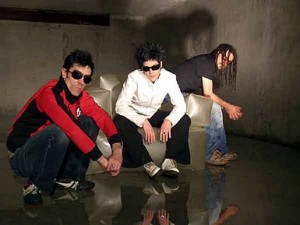 GOSE, the popular avant-garde techno accordion band from Arrasate-Mondragón, Basque Country, will play at the Basque Center in Boise on November 12 at 8 pm. This is a free event, so save the day on your calendars and come down to the Basque Block!

The band will start out their tour in San Francisco for this year’s Basque Cultural Day celebration, which will follow the theme of the popular annual event in Baigorri – Nafarroaren Eguna – The Day of Navarre. This event is organized by the Basque Education Organization (BEO) and aims to strengthen the ties between both Navarrese territories and to affirm their common Basque identity. The program will feature distinguished speakers from the Center for Basque Studies and a short film presentation, a dance performance by the Zazpiak Bat Dancers and a concert by the GOSE.

GOSE plays it all: glam, rock, punk and some traditional Basque favorites! The trio is formed by Ines Osinaga (singer and accordion), Iñaki Bengoa (percussion and programming) and Osoron (guitarist and bassist). GOSE began their silent journey in 2004, as a result of the trio’s sharing of musical ideas.

I was curious to see how one of the Basque Country’s more famous bands made their way to the United States – Boise in particular, so after getting his name from Euzkaldunak board member Ysabel Bilbao, I contacted Philippe Acheritogaray, who had been working with the Basque band since they first made contact a year ago, during Philippe’s trip to the Basque Country to visit his brother. He was familiar with the band thanks to their song in the movie Eutsi!, which the BEO had shown during the 2009 Basque Film Series. He talked to the band after the concert and then kept the contact going by email.

Earlier this year the band’s manager told Philippe they were interested in coming to the US and decided the November 5 Basque day event would be a good fit. The band applied and received a special fund by the Basque Government to help new Basque artists become known overseas. Singer/songwriter Urko Menaia’s tour earlier this year was also made possible thanks to this grant. One of the conditions to receive the grant is securing room and board in the foreign country prior to the artist arrival. The BEO in San Francisco and the Basque Center in Boise agreed to host the band during their two-week stay.

This is not the first time the BEO and Euzkaldunak have brought famous bands from the Basque Country to the United States. In 2005, San Francisco and Boise had a chance to enjoy a concert by two of the best known rock bands in the Basque Country, Betagarri and Berri Txarrak. Speaking of Berri Txarrak, they are in the middle of recording their next album in Venice Beach, CA – right now!

San Francisco and Chino are already working on next year’s Bertso Jaialdia II (February 2012) with bertsolaris Amets Arzallus and Julio Soto of the Basque Country who will join the four U.S. based bertsolaris, in a follow-up to the Bertso Jaialdia that was done for the 50th anniversary of the San Francisco Basque Club in March 2010, with Andoni Egana and Maialen Lujanbio.

4 thoughts on “GOSE will play in Boise on November 12”