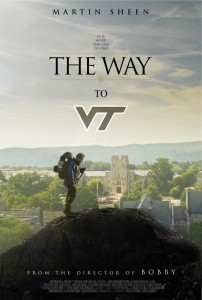 “The Way”, a movie about the Camino de Santiago, will be shown at the Flicks in Boise on October 21. It’s written and directed by Emilio Estevez. It stars Martin Sheen and it features a lot of northern Spain–it was shot almost entirely in Spain on the trail in about 40 days in 2009.

Back in September, Annie Hesp, an instructor in the Department of Foreign Languages and Literatures at Vriginia Tech who earned her BA in Spanish from Boise State in 1999, with the help of another faculty member, managed to convince a Hollywood actor and writer to bring their new movie, “The Way,” to Virginia Tech.

Annie Hesp initiated an in-person plea with Martin Sheen and Emilo Estevez at a conference back in February. As Emilio was writing his script, she was working on her dissertation. They were using a lot of the same texts, as her dissertation was on first-person narratives of the Camino de Santiago. For Annie, the movie was like seeing her dissertation get made into a movie.

Annie had the opportunity to meet Emilio and Martin – who have put their heart and soul into this film – on three different occasions. They were gracious enough to show the movie at Virginia Tech to 2500 students and provided a question and answer session for the students.

According to Annie, the movie has made a lot of people want to go walk the trail for themselves or just go study abroad. After the movie event, Virginia Tech has seen a huge jump in study abroad applications and in several of them, students have directly mentioned how moved they were by the movie and how it made them want to go do something.

2 thoughts on ““The Way”, a movie about the Camino de Santiago, opens in Boise next week”