Not so long ago, I finally took a deep breath and wrote about being Basque and the struggle to find my place and be somewhat at peace with my feelings. Now I wonder how different that essay would have been if ETA had called its definitive ceasefire 20, 25, or 30 years ago. 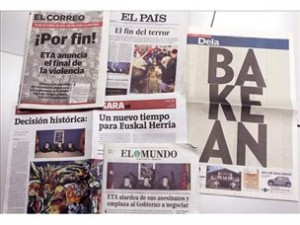 Last Thursday, ETA announced they were ending four decades of terrorism in the Basque Country and Spain. October 20, 2011, the first day of my entire life without ETA, a day that I thought would never come, especially during my late teens and early twenties, when ETA would kill or kidnap someone every single month, sometimes every other week. I lost count of how many times I went down to the plaza to join Gesto por la Paz (the Association for Peace in the Basque Country) to condemn the terrorist attacks. How uncomfortable it was to stand there in silence, listening to the ETA supporters who would gather right in front of us and chant their chants. These were people I’d known all my life: my neighbors, my friend’s mom, dad or uncle, some were even my friends – and they still are.  It’s hard to explain. But then again, who can understand four decades of violence?

I’m not saying governments did not play a part in dragging out the resolution to the conflict. Even after ETA’s permanent ceasefire announcement there are certain politicians who won’t move a finger to help the process along. In my opinion, that’s a very good way of resolving nothing. I guess I would just like to see a little bit more optimism all around. True, ETA has yet to physically turn in their weapons and has not apologized to the victims of its past actions in the announcement. This makes it for a very skeptic welcome of the news by ETA victims. Then again, my sister is alive and well, making me laugh with her sharp remarks, my mom still cooks yummy meals every day, and my dad asks about the weather in Boise every time he has a chance. Many people (829) are not as lucky.