The “fun in the snow” concept is lost on me. Other that looking pretty on Christmas morning and the obvious benefits of having water in the summer, I just don’t see the point of freezing you ass in Bogus Basin (Boise’s ski resort). As I see it, summertime greatly reduces the probability of traffic accidents caused by the snow (I’m sure there is a study on that too), plus you can still go skiing if you want, comfortably dressed in your bathing suit. 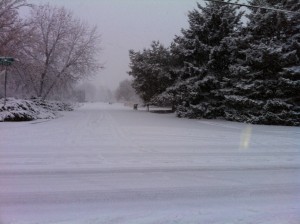 It’s not like I didn’t know the storm was coming. After a snow-free Idaho winter (blissfully so, if I might add), news of the impending storm flooded radio stations, newscasts and newspapers all day yesterday. So yes, I was well aware of the white stuff making its grand debut in Boise this morning. I had a dentist appointment at 7 AM, which I knew would only last about a half hour, leaving me with 60 minutes to spare to (I thought) get into work at 8:30 AM, right on time. Man, was I wrong!

I got out of the dentist office, the left side of my upper lip slightly stretched to the right, giving me a lopsided look and feeling like it was three times bigger than normal. It’s better than feeling the pain while your teeth are being worked on, though. I’m all for pain killers. Not having access to an epidural would have been a deal breaker on the whole giving birth ordeal. The only draw back of having your mouth numbed (other mumbling your words) is fully enjoying that much needed cup of coffee on your way to work because your clothes get all messed up with every sip you take.

I might have mentioned before I’m not the best driver out there. My coworker Mike told me when I got to work this morning that he’s not worried about him driving on the snow; it’s the other people who make him nervous. I, on the other hand, I’m worried about me driving on the snow. I’m self-sufficient. I don’t need other people to get on my nerves. Looking at the blanket of snow covering the road, along with and all its markings and the names on street signs made the little driving skills I have disappear like the snowflakes I saw landing on the ground. So in the name of caution and good judgement, I decided to take a right on Cole, thus avoiding potentially slamming onto oncoming traffic.

As I drove up Cole Road, it was still dark and all I saw was white and fog, and I missed the right turn onto Amity Road. Pretty soon I started feeling like the Energizer bunny, going and going and going while I waited for the perfect spot to turn around and drive back to Victory Road. I looked at the clock: still 45 minutes before I have to report to work. It was so freaking slow I even had time to fumble with the settings on my car to set the clock back one hour. Four months later, I am now officially back to Standard time. I googled daylight savings when I got to work and dammit, I should have just held on a little longer and save myself the trouble because now I’ll have to change it again in March.

Bumper to bumper. The Touareg proximity alarm going off non-stop as cars tailgated me all the way to H-P. If it hadn’t been so cold and snowing, these people would have heard me, but the hell I was going to get out of my car in that weather. I turned the radio up and om-ed a little. True, I drove so slowly that other cars were passing me by, but I wasn’t going to risk it. My car is fairly new and I’ve already hit it once.

I finally made it, both my car and I still in one piece. Plus it took so long that the effects of the anesthesia wore off and I was able to enunciate just fine on my first call of the day.

3 thoughts on “Not a true Idahoan after all”