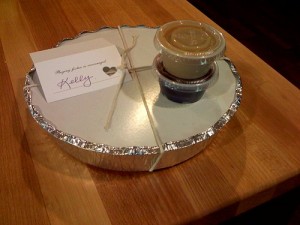 Sure I’d love to rely on diet pills to counteract the effects of stuffing myself silly with the biggest chocolate peanut butter cake slice you’ve ever seen, right after inhaling a generous serving of Chicken Parmigiano, and a couple or five pieces of garlic bread. But everyone knows that diet pills do not work, unless you exercise and don’t eat junk, in which case, why even bother with them?

So I used the HCG drops instead ($35.95 + shipping and handling for one month). I dropped the money and I dropped the liquid in my mouth, and that’s all I dropped. I know it’s worked for other people, maybe I did it wrong? The instructions did ask for you to stuff your face with as much fattening crap as you could handle for two days before starting the diet, but after the first day I was ready to go on a hunger strike indefinitely it was so revolting.

Then, I was still employed by that other company which kept my stomach in a knot the whole time I worked there and robbed me of (let’s see… 365 nights at 4 instead of eight and I carry one) 1,460 hours of sleep, which in retrospect, probably had quite a lot to do with my weight skyrocketing due to overeating, because what the hell are you supposed to do with those extra hours? On the other hand, the company recognized it was a stressful job and gave us the tools to deal with it, you know, like checklists to identify the top stressors in your life and how to eliminate them. I went through all the steps diligently and 2 months later I was working at Hewlett-Packard. It’s been almost a year I have yet to cry at my desk. Since changing jobs I’ve been progressively using the smaller-sized items in my closet.

Therefore, I try to mind what I eat, especially when I go to a restaurant. That said, I won’t refuse a glass of wine or some yummy dessert if I feel like it, and ordering those items has nothing to do with who’s footing the bill. We’ve all gone to a company function where people will order the most expensive thing on the menu (or two less expensive items and box one) just because they’re not paying. After 15 years I’m used to taking leftovers home, but talk about a culture shock the first time around. Now I even get defensive when I see the disapproval on my friends’ faces during their visits from the Basque Country, like I have to apologize for becoming so Americanized. I’m still totally against having ice on my water, just so you know.

But c’mon, asking for your dessert to be directly placed into a box to carry home at one of said company dinners is, in my opinion, taking it a little bit too far.