Two more years and Boise’s Anduiza building will reach its 100th year anniversary. A century might sound like nothing special for most Europeans (for example my hometown, Bilbao, is over 700 years old), but it is quite rare here in the West. Located in the middle of downtown Boise’s Basque Block, this building holds a special meaning for the city’s Basque community because it houses Boise’s only fronton, a three-walled court used as playing area for pelota and pala. The Anduiza Building was built as a boarding house for sheepherders by the Anduiza family in 1914, and the first pelota game was played a couple of years later. 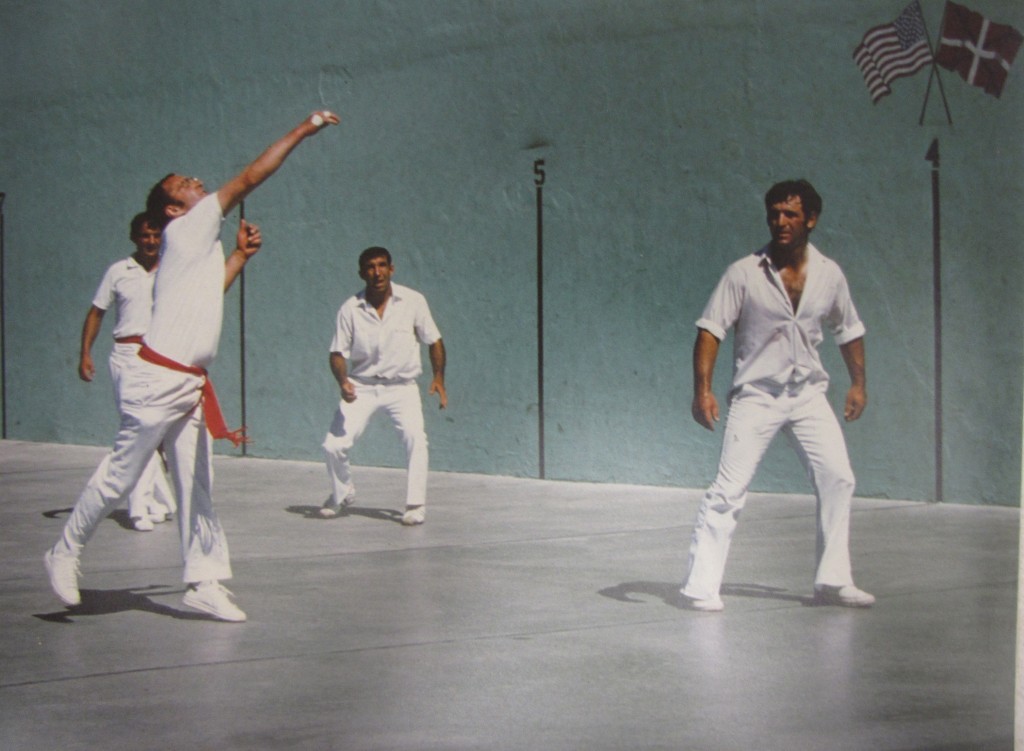 An engineering firm occupied it for almost 50 years, but they never expanded into the area where the playing court is located, so it hasn’t been modified since it was built – although it was remodeled a few years back thanks to the work and donations from Boise’s Basque community members. Two Basques bought the building in 1993. They lease the upper part for offices and the court to the Boise Fronton Association, formed to preserve the sports of handball and pala, which is played with a heavy wooden racquet and a hard rubber ball.

Just last month, Joko Garbi players from Uztaritze (Iparralde) offered to play their sport for the members of Boise’s community. It was the first time in its one hundred years of existence that a game of this type took place in the fronton.

This old court plays a significant role in the lives of many Basques, mine being one of them. The Boise Fronton Association organizes both men and women pala leagues, which take place mostly during the spring and fall. About 20 women and roughly the same number of men participate in the leagues every season. Matches take place on Mondays, Wednesdays and Thursdays, from 5:30 to 8:30. The rest of the time the fronton is available for make up games or to practice, and local Basque band Amuma Says No uses it to prepare for their concerts.

On a personal note, this will be my 5th season as a pala player. In the last five years I’ve made more trips to the fronton than I can remember. I have to regret one yet. The women’s pala league has not only allowed me to exercise away from the gym, but it has been great to meet other Basque women. Most importantly, the fronton has provided the perfect space for me to bond with my 8-year old son, who simply loves the game. The look of satisfaction on his face every time he makes a good serve or wins a point over his mom is the only reason I need to continue supporting the game and the fronton.

I’m not the only one with strong feelings about this place. This old building owns quite a bit of real estate in Mark Bieter’s heart, a third-generation American-Basque from Boise, who now lives in Washington DC. Back in 2000, Mark, along with his brother John, chronicled the story of Basque presence in Idaho from 1890 to the present, which begins with a few solitary sheepherders and follows their evolution into the prominent ethnic community of today.

Mark visited Boise during Jaialdi 2010 and was totally impressed with the pilota and pala games he saw. He couldn’t believe how good the players were, and he was moved by how many spectators showed up to watch the games. Later that day, Mark struck a conversation with a pilota player from San Francisco, who compared Boise’s fronton to Wrigley Field, the 1914 Chicago baseball field, which has a completely different feel from today’s more modern baseball fields (interesting how both historical structures date from the same year). This took Mark back to his younger years, when he was still living in Boise and used to play pala with his friends, in the way Basques from 100 years ago did when they first came to Idaho.

Mark cannot stress enough how important it is to keep the fronton and its history alive for the enjoyment of future generations. For this reason, he has taken upon himself to share this important milestone by writing a very nice post about the fronton on his blog.

You can show your support for this landmark facility by becoming a member of the Boise Fronton Association. Their introductory price for new members is $40 and renewed memberships are $60 per year. Dues cover a minimal annual usage fee, liability insurance, and electricity.

On the other hand, Phil Goodson, with McU Sports, has put together an apparel catalog for the Boise Fronton Association.  To purchase anything with the BFA logo on it, just fill out the order form with payment and the Fronton Association gets back 10% of all sales. Phil can be reached at the downtown office at (208) 342-7734.