Once again, our friends from About Basque Country Blog found a very interesting article on Basques around the world. This time, they bring us a detailed news report published by Smithsonian magazine on American Basque Cuisine, written by By Jonathan Gold. 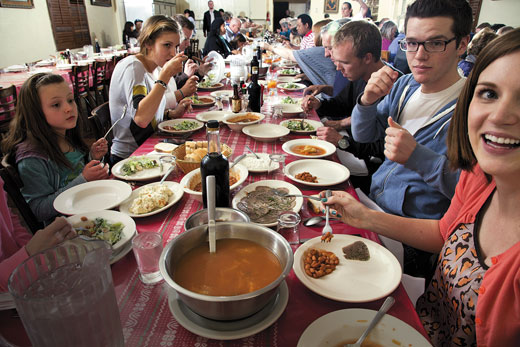 Family-style dinner at the Noriega Hotel (Courtesy of smithsonianmag.com)

There are a lot of reasons to go through Bakersfield, California, even if you don’t happen to be in the oil business or on your way to a mountain lake. Bakersfield is where the “western’’ in country and western was forged, and you can still hear the spiritual descendants of Merle Haggard and Buck Owens in the clubs. Dewar’s, out near the high school, may be the best unreconstructed ice-cream parlor in the country, famous for its banana splits and its peanut butter chews; the lunches of pasta and beans at Luigi’s, in business since 1910, speak of traditions that had faded in New York by the start of the First World War. But when you find yourself in Bakersfield, either accidentally or on the way to somewhere else, the first thing you’ll look for is likely to be a Basque restaurant—one of the old restaurants out by the Union Pacific station just east of town. The late Chief Justice Earl Warren, son of a railroad hand, grew up in a modest house a few blocks away.

People argue whether the best Basque food in Bakersfield is served at the Pyrenees, where the ancient, dark woodwork is still intact, at the diner-like Benji’s or at Wool Growers, where an extra buck will buy you a blizzard of freshly chopped garlic on your fried chicken. The 119-year-old Noriega Hotel, the oldest and most famous of the half-dozen or so Bakersfield Basque restaurants, was honored by the James Beard Foundation last year as an American classic. After the ceremony, Rochelle Ladd and Linda McCoy, whose family has run Noriega’s since 1931, were mobbed by admiring chefs. The Basque house cocktail, Picon Punch, served everywhere, has become a grail among cocktailians. And although the culinary traditions are 80 years removed from the homeland, the restaurants retain a bit of the glamour of the Basque Country itself, where restaurants like Arzak, Mugaritz and Asador Etxebarri rank with the very best in the world.

The Basque Country is kind of the obsession of the food world at the moment, home to a concentration of Michelin-starred restaurants that could make Paris blush in envy, a variety of local seafood perhaps unmatched in the world and a culture of eating that demands high quality and innovation in smoky cider houses as well as temples of cuisine. It is one of the most prosperous regions of Europe, and its government supports the culinary arts nearly as assiduously as it does its famous museums. If culinary modernism has a spiritual home in the era after elBulli, the fabled Spanish restaurant that closed last year, it is probably in Vizcaya and Guipúzcoa.

So a traveler experiencing American Basque cooking for the first time, perhaps at Wool Growers in Los Banos in California’s Central Valley, or at lunchtime at a Mexican joint called Margaritas in Ely, Nevada, the last crumb of Basque cooking left in that remote mining town, could be forgiven for wondering if the plain, meaty cooking nurtured in American Basque boardinghouses had anything to do with the intricate, seafood-intensive cuisine of San Sebastián or Biarritz or how a region famous for its sophisticated industrial culture produced a diaspora whose roots seemed to be exclusively in sheepherding—and restaurants as close to 19th-century dining as anything in the United States, scattered among the old sheep towns of the West. We can only marvel and nod, mostly because we have a plate of oxtail stew to attend to.

American Basque food is famous less for its refinement than for its heartiness, often a dozen or more courses served family style from enormous platters on long, communal tables protected with worn oilcloth. The places where it appears are often the remnants of a once-great archipelago of Basque hotels, built to serve as a bit of home for immigrant sheepherders, stretching from Southern California all the way up to Boise, Idaho. The hotels served as boardinghouses, social centers and informal banks in the smallish Basque communities they served—full-service operations where the famously difficult Basque language was both spoken and understood, where a sheepherder could find a job, property or even a spouse. (The hotels tended to be staffed by young female immigrants.)

When you are looking for the Basque boardinghouses that survive today, or the restaurants that occupy their ground floors, you will never do wrong by heading for the oldest part of town, down by the railroad tracks. As an experiment not long ago, I decided to try to find a Basque place in Fresno without first looking up a name or an address, and I managed to find the Basque Hotel within five minutes: square building, mournful train whistle and all. In some parts of Nevada, this often puts the restaurants within a block or two of the red-light district, although it does not look as if the two types of establishments have an overlapping customer base.

If you want American Basque food in its purest form, follow I-80 through northern Nevada. One bitterly cold week this winter I pointed my truck toward Nevada and tried to see how many Basque restaurants I could visit over the course of a long weekend. I stopped by the Star Hotel in Elko for a dish the menu called a Boarder’s Lunch, thinly sliced beef pan-fried with onions and chiles, and also for a delicious pork loin sautéed with roasted red peppers; then to Toki Ona a few blocks away for roast lamb and potatoes. In Winnemucca, a couple of hours west, there was the splendid Martin Hotel, crammed with hunters in town for bighorn season—I felt naked without a camouflage cap—where I had steak Martin, which is a big grilled rib-eye buried under a mountain of mushrooms and garlic, and also something very like chicken-fried sweetbreads with country gravy. The next morning I drove down to Louis’ Basque Corner in Reno (garlicky tripe, although I was disappointed the famous rabbit wasn’t on the lunch menu) and continued on to JT in Gardnerville, south of Carson City, for a dish of tripe stewed with pigs’ feet that made the waitress squirm but made me very happy. As is customary in American Basque restaurants, when you order the main course, you end up with a half-dozen secondary courses. Two Basque meals a day feels like the triathlon of Old West eats.

I loved the Nevada restaurants. But still, I couldn’t wait to get back to Bakersfield, which feels like home. I tend to pass through maybe three or four times a year, and over the last couple of decades I have struck up conversations with ranchers and artists and retired schoolteachers, construction guys and roustabouts, couples on the snowbird circuit, 9-year-old boys sulking because their parents wouldn’t let them at the flasks of rough wine included in the price of their dinners, and an Elko farm-equipment man who carried in his wallet a creased photograph of what he said was his mother sunbathing topless in Biarritz in the months before World War II.

And more predictable than the company in Bakersfield is the pattern of the dinner: tureens of cabbage soup served with bowls of beans and a spicy Basque tomato sauce, followed by platters of thinly sliced pickled tongue, cottage cheese stirred with mayonnaise, boiled vegetables with white sauce, and a very fresh, very plain salad made with lettuce grown in the next town. The bread comes from the Pyrenees Bakery just around the corner.

If you happen to be at the Noriega Hotel, the only Bakersfield Basque place that still functions as a boardinghouse, this procession of dishes, known as a “set-up,’’ is only half of the meal. The set menu changes daily, but there will typically be a tureen of lamb or beef stew, a plate of overboiled spaghetti in tomato sauce, and finally the main course of fried chicken or baked spare ribs or leg of lamb accompanied by vast platters of hand-cut French fries that still have the flavor of the field about them. If you are a 9-year-old boy, you will be given a scoop of sherbet, and after dinner you will throw a tennis ball around the adjoining tennis court while your parents linger at the bar for a last Picon Punch. Life is as it ever was at Noriega, except that you hear a bit less Basque spoken with each passing year, and the Picon Punch, a formidable highball of brandy, grenadine and a bitter tincture of herbs, is made with a domestic liqueur instead of the unavailable Amer Picon from France. Is there anything better than watching a burly ranch hand snarl “Gimme Picon’’ at a barkeep? Only drinking one yourself.