This Saturday in downtown Boise people gather around tables at Leku Ona to play mus. That’s said like moose.  It’s a Basque card game, think poker meets chess. The winner will go on to compete in a national tournament in Chino, California in late April. 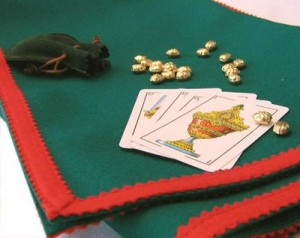 Xanti Alcelay is the tournament coordinator. He also plays mus. Alcelay knows what it takes to play mus. He recently won a competition in Homedale, Oregon which qualifies him to go to the nationals this year. “I’m a little embarrassed to admit this,” he says talking about the win. “My hands were shaking not because of nerves but because of the adrenaline.

He remembers the drive home that night. Alcelay and his mus partner relived each play for all eight matches. “It was pretty awesome,” he recalls.

Mus originated in Spain and dates back more than 200 years. You need four people to play. Unlike poker, you have a partner. There are four rounds in a game and each round you bet chips. The first team to reach 40 points wins.  It sounds simple but it’s actually pretty complex.

Jerry Aldape started playing mus in Boise when he was ten in the early 1960s. By the 70s he was playing in local tournaments. Aldape says he’s better now than he was back then but he’s still learning. “It’s like a chess game,” he explains over lunch. “You’re learning every single time you play with someone what they are doing and how they did it and where you made a mistake. It’s constant evolution about the knowledge of the game.”

Upstairs in Boise’s downtown Basque Center four people – all in their twenties – sit around a card table. Tyler Smith and three other friends each hold four cards in their hands. “I’m first to act,” he says. “Unless I have really good cards, I’ll typically pass it over to my partner and see what he wants to do.” Smith’s cards aren’t good. So he calls “mus.” That means he’d like to trade out his cards for a new hand.

Mus is a game of bluffing and strategy. And believe it or not there are set facial expressions. “The signs are a wink for 31. Eyebrows for having doubles,” laughs Aldape. He learned those expressions and the rules of mus from his uncle and father.

Aldape’s father moved here to Boise from the Basque region of Spain during the Spanish civil war.  Like many immigrants from that time, Aldape’s dad felt pressure to shrug off his cultural ties to the old country. “I think as he got older I don’t think he was really interested in us learning the Basque language. He didn’t want us to be embarrassed to have that difficulty that he had.”

But Aldape did learn traditional Basque dancing and how to play mus.  “The whole heritage is very important to me,” he says.  So when Aldape sits down with other Basques to play mus Saturday, it’s not just about the card game. It’s about trying to stay connected to their culture. Tyler Smith gets this. He says “If the younger people like us don’t play then it’s (mus) not going to be around anymore. So it’s important for us to learn how to play and keep playing to keep the tradition going.”

Tyler Smith learned to play mus when he was just 14 and he helped teach everyone around the card table how to play the game. Annie Gavica didn’t grow up with mus. For her parent’s generation she explains, it wasn’t cool to be Basque. “They were supposed to learn English, to be as American as possible and go to school and be a part of the melting part of America and not stand out as a Basque,” she says.

That’s why she along with her sister have teamed up to learn mus.  For her and the rest of these twenty-something’s, the old country isn’t something to be embarrassed about. “The next generation wants to stand out as ‘whatever my culture is,’” Gavica says as she picks up her cards.  One way to do that is to keep this card game with its funny facial expressions alive.