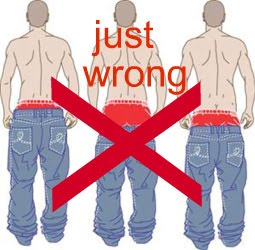 You’ve seen them. Those guys walking around with their pants around their ankles, showing their underwear in its entirety. Last week, I heard on the radio that a northwest Indiana town was trying to pass an ordinance to ban this trend.

I must confess. When I set out to write this post I was all for arguing against the initiative. I mean, who does a city think it is, getting in the middle of people’s clothing preferences? But then I did a Google search for baggy pants, and I changed my mind. Where do I sign to help this ordinance become the law? I’d seen guys in my town thinking they’re cool dressed in this fashion, but not to the extreme shown in some of the pictures (for example), but I do live in Boise, Idaho, after all.

Nah… Now seriously. I do think it’s a dumb trend, but if some guys want to look like morons, it’s their choice. At least they’re not showing half of their ass, like this jewel here. C’mon, that goes beyond being a muffin-top, it’s more like a “butt-fro”. And THAT should be illegal.

UPDATE: It looks like a Louisiana town HAS MADE baggy pants illegal and anyone caught wearing their pants hanging below the waist will be subject to a fine. Ummm… I am so looking forward to hearing how this ordinance turns out.