People in Boise, Idaho are spoiled as far as Basque food and drinks is concerned. We can meet with friends for drinks at Gernika (202 South Capitol Boulevard), follow with a couple of stops at the Basque Center (601 Grove Street), then the Basque Market before making it to Leku-Ona for dinner. We can even venture towards Meridian and visit Epi’s for a nightcap, if we have the time and a designated driver.

Thanks to Fausto Cuares, we now have another option for delicious Basque food in Twin Falls, Idaho, a city 131 miles east of Boise: Basque – American & Peruvian Diner. 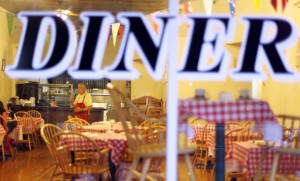 In December, the 61-year-old native of Peru became his own boss for the first time when he opened his new restaurant in downtown Twin Falls.

Basque – American & Peruvian Diner, at 117 Main Ave. E., has a sprawling menu for a startup. Cuares serves everything from traditional American breakfasts of eggs and bacon to sandwiches, steak and pastas.

He recommends his tallarin saltado ($10.99): pasta sauteed in soy sauce with diced garlic, onions and tomatoes.

Cuares, who immigrated to the U.S. at 27, is eager to introduce Magic Valley residents to traditional Peruvian dishes, such as anticuchos (pieces of bull heart) for $15.99. For dessert, Cuares tempts diners with his mazamorra morada ($2.50), a dessert popular in Peru made from purple corn and black currant fruit.

“It’s thickened into pudding, and spiced with cinnamon and cloves,” the bilingual menu says.

Cuares said his wife, Alejandrina, inspired him to start a business of his own after watching her husband work for 21 years in a restaurant in Elko, Nev. The family moved to Jerome in October.

So far it’s been difficult for Cuares to spread the word about his restaurant.

“I feel no good because Idon’t have no customers,” he said. Cuares had to throw out food, but he hopes more people start to trickle in soon.

“It’s an opportunity to eat a different kind of food,” instead of the same old fare, said Nonotol, who dined with his son, Lincoln.

Nonotol tries to support his countrymen, so he decided to give Cuares’ place a shot.

The Cover family, who moved to Twin Falls from Texas three weeks ago, were driving along Main Avenue when they spotted the restaurant. They like to support local places and ordered burgers, sandwiches and fries.

“The fries aren’t out of the bag,”Michelle Cover said. “They look fresh.”

Cuares is giving his endeavor a year to succeed. If business doesn’t pick up, he’ll have to close down and figure out something else.