I inherited a trampoline a couple of years back, when I moved into my current dwelling, “Smoky”. My renters’  new place had a smaller yard so they were forced to leave it behind. My house is all remodeled now, but before Mike took charge, gutted it and fixed it, it was home to a couple of smokers who’d been lighting them up for about 30 years. According to Mike, the place smelled like a bowling alley before Boise got hit with the smoking ban, while all the walls were covered by a thin layer of yellow cigarette film. I’ll have to take his word for it. I don’t think I went over there more than once before we bought it, and I had never seen the finished product until I moved in. Let’s just say I wasn’t very excited about the whole getting a rental deal, so I did the minimum to make the purchase happen: I went down to the lending office and plastered my signature all over that 10-inch thick file. Looking back, I wish I’d been more involved, more excited about the whole process, but above all, more supportive of Mike’s endeavors. 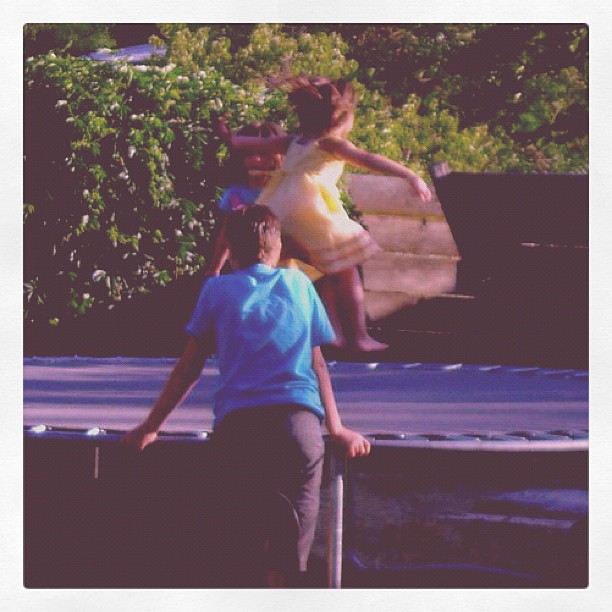 As soon as the weather turns nice, the kids set aside the gadgets and Disney’s Channel’s “The Suite Life on Deck” (thank god) in favor of the trampoline. It freaks me out a little, watching them up go higher and higher the older they get, tirelessly practicing front and (gulp!) backward flips. However, I’ll gladly put up with the small threats of a heart attack if it means they’re having fun like it was 1973.  They’ve used it so much that some of the fabric straps ripped and a bunch of springs popped out. After continuous requests from my kids to get the trampoline back into shape, I finally got a hold of a place in Boise that deals with these type of repairs, A J Landmark. It took several calls and a couple of emails with pics of the ill-fated trampoline to get the company engaged, but I eventually got Phil’s attention .

Initially he’d asked me to remove the black mat myself. It didn’t take me long to realize there was no way I was going pry the springs out of the frame on my own. No, I didn’t have a spring-prying-out-of-the-frame tool thingy. Yes, I do have $45 for you to come over and do it for me. Once again (maybe I should look into this pattern some day), I wish I’d been a tad more interested in finding out about the tool. It took the guy about a minute and a half to get the mat out, and 30 seconds of that he was just looking at me while I talked. He got into his F-150 and left.

140 dollars, forty-five and one minutes later, my trampoline is ready to get abused again. True, I could have saved $45 bucks if I’d paid more attention, but then I would have had to work on removing the mat, load it onto my car, drive all the way over to the shop, go back home, drive back over, pick up the mat, and put it back on. Nah… I rather look at it as my way of helping local businesses grow.

3 thoughts on “Helping out the local businesses”