In a few hours, Athletic de Bilbao will face Athlético de Madrid in what could be a historic game for the Basque team. This is Athletic’s first European final in 35 years, and the last time they played Athletic lost by narrow defeat on away goals against Juventus in the 1977 UEFA Cup final.

Making it all the way to a final, whether at a national or international level, it’s always hard work and always rewarding. However, when the team rising to the top is made up entirely of local players, it adds an even more special touch to the feat. I know, this issue has been talked about so many times that I’m sure there is no one left in the world who hasn’t heard about it – especially given our team’s extraordinary run this season. Athletic’s fans love it and most people admire it, but there also those who don’t agree with it. Others simply don’t understand it, as reflected by the following question posed by a reader: Would importing non-Basques significantly improve the team (winning is everything) or is it more important to be the Basque team? 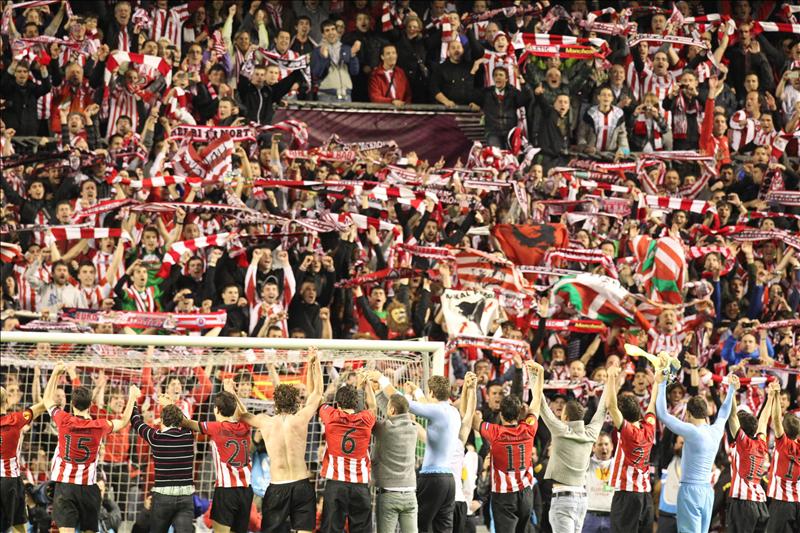 In my opinion, when it really comes down to it, people think what they want to think without making an effort to look at the facts, and many like to turn Athletic’s philosophy into a political argument. I’m the first one to admit I never bothered to find out exactly what the requisites were to be considered “Basque” under Athletic’s hiring philosophy, so I got in touch with Javier Ucha Marquiegui, Foregin Affairs and Member Service Manager for Athletic de Bilbao, who confirmed that in order to play for the team you have to either “come up through the club’s young players’ reserve or the young players’ reserve of the other clubs in the Basque Country (Bizkaia, Gipuzkoa, Araba, Nafarroa, Lapurdi, Zuberoa and Nafarroa Behera), or be born in these territories”. It’s that simple.

A couple of years ago Athletic considered including players from the Diaspora as potential team players, but the initiative was shut down by the members. So much for cheering my son Andoni in San Mamés as an Athletic player. I guess he’ll just have to take Messi’s place in Barcelona FC. And that’s ok. It is not easy to do what Athletic has been doing for so many years. Lines have to be drawn at some point, and once in a while they will be blurry. We need to remember that the parameters Athletic uses to determine who can play in the team are only within the context of soccer.

I read an article last week where actor Antonio Molero raves about his team, Athletic de Bilbao. It wouldn’t be anything special except that he comes from a family in Toledo, Spain. I started to wonder what people from other countries or who follow other teams thought on this matter, so I took a (very unofficial) poll on Facebook in order to find out.

Michael, a native Idahoan, doesn’t support Athletic de Bilbao because as a non-Basque it’s hard for him to embrace a team with their philosophy. Michael is no stranger to the Basque Country, as he lived there for a year back in 1995, has been back multiple times since then, and even has a couple of  Basque-American kids. He genuinely loves the Basque Country, and believes that “there are many ways that the team could create a much more inclusive experience for people who are not native Basques”. In his opinion, “if it were a matter of simply supporting local players in order to give them an opportunity to play at the highest level, that would be more palatable. However, when you add the element of non-local players born in the Basque Country (Basque players) who didn’t actually play on regional teams, then the policy begins to take on subtle tones of racism.”

Third generation Basque-American Mark Bieter, another Idahoan now living in DC, agrees with Michael to a certain extent. “I suppose there’s a bit of truth to what he says, although I don’t think it’s racist. I’m not sure exactly what the rules are, but from what I understand you have to be from the Basque provinces, and that’s not racist. The story about the black who plays there now is a perfect example. Maybe it’s regionalism”. In Mark’s opinion, Americans have a different perspective on these type of issues and “cringe at those kind of exclusions”. However, he continues, “Basques have a unique history and so does Spain. I think that’s part of the reason Basques are still around (as opposed to, say, the Romans or the Vikings) is because in general they are conservative and ethnocentric. They’ve had to be. So it makes perfect sense for Athletic to say we’re only having Basque players (however they define Basque).”

Michael and Mark are not the only ones who mention racism when asked about Athletic’s philosophy. Sean Hopwood, Office Manager at Day Translations in Miami and a Real Madrid fan, likes Athletic’s policy but points out that if a US sports team tried to implement something similar it would be considered racist. He thinks it’s weird how people are so proud of their roots, their blood, and how many live by those two things, when in reality we’re all very similar: Catalans, Serbians, Croatians, Bosnia, etc. They all want to be their own country. In his opinion, nationalism stems from people’s need to feel unique and special, to feel they belong to something bigger than they are.

Josu Zubizarreta, also a third-generation Basque from Boise, thinks that the philosophy is awesome because it makes Athletic more than just a regular club. It allows for local players to truly dream and aspire to play in first division. From the fans perspective, you can root for people who feel like family members. In Josu’s opinion, it’s an amazing model of how a team can be successful without having to spend hundreds of millions a year. On the other hand, and along the same lines as Michael’s opinion, Josu believes that the philosophy becomes twisted sometimes. He finds it very frustrating that players who are actively involved in the Basque culture but were born in the diaspora (Zabaleta, Forlan) can’t play for Athletic, while others are on the team by pure coincidence (David Lopez).

Chilean-Basque Gustavo Ossa Medina is another proud supporter of Athletic’s philosophy who couldn’t help but brag about Higinio Ortúzar Santamaría (born January 10, 1915), a retired Chilean soccer player who got to play for Athletic Bilbao during the first half of the 1930’s. He played for Erandio and for Barakaldo FB before making it to first division. All four of Ortuzar’s grandparents were Basque immigrants and he didn’t have any problems playing for a team that hadn’t hired a foreigner since 1911. This is a very good example of those blurry lines I mentioned before. However, I think Athletic has been much more linear and consistent with his hiring policy since then.

Even Real Sociedad followers have good things to say about Athletic. Mariluz Grandal, was born in Donosti but now lives Sweden with her husband and daughter. She admires the way Athletic clings to his hiring policy in such a competitive league as La Liga, and points out how, despite it all, the Lions have managed to always stay in the first division. (The only two other teams who can make that claim are Barcelona and Real Madrid).

These are just some of the comments I received. I have no doubt yours will be different, and I would love to hear it. I will publish every opinion, as long as it’s written nicely and respectful of other people.

48 thoughts on “The Lions of Bilbao: A view from the outside”