It’s 11 am on Mother’s Day. My friend Ysabel’s number flashes on my iPhone screen, La Oreja de Van Gogh‘s ringtone filling the silence at the Walgreens Photo Counter where I’m waiting to get my daughter’s passport pictures taken. “What’s up?” She wants to know if I’m home to help Esther (my other friend and her roommate) with her iPhone quest by logging onto her Find My iPhone account. She left it on the taxi last Saturday night, and she’d just bought it on Friday! My heart went out to her, although it’s true I wasn’t surprised once I thought about the chain of events from that night. 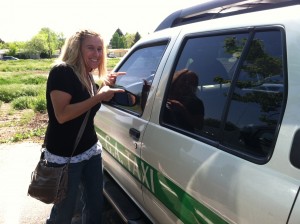 Esther Ciganda. (I told you she looked happy!)

Esther and Annie had made it to the Women’s Baleen final and won their match against Geneva and Terri. I get how elated they must have felt, being Txapeldunak and all, but does it really mean they have to start celebrating right away? It’s not even 4 pm, for crying out-loud. When you factor in Mother’s Day dinner at the Basque Center right after, followed by a bit of club hopping until hailing that cab at 3 in the morning, one begins to understand how the unthinkable could have happened.

Needless to say, Esther is devastated. (I’d love to get on her case about how important it is to take care of such a precious possession, but given my track record, I better just go on with the story.) Everything that could go wrong, did. They didn’t have a number for the taxi company because they hailed the cab in the middle of downtown. Nobody bothered to check out the name on the side of the car (or was it a van? An SUV?), and they had no credit card receipt with the company’s name because they paid with cash. They only remember it was a white vehicle with green stripes on the side.

Esther tosses and turns all night long, periodically calling her new iPhone in hopes the cabby gets a hint and picks up. In total she only called 26 times. If you think she’s eager to get her phone back, think about that poor guy, driving other customers around while declining a call every 0.2 seconds. Finally, Ysabel wakes up. Together, the girls vow to recover the iPhone that very same day and hatch out an infallible plan, which they proceed to carry out with the help of some of Boise’s Basque community brightest members: Martin Bilbao, Ysabel’s brother and Boise’s Basque Center’s president; Annie Gavica, the Basque Center’s vice president and Esther’s partying companion; and Alaina Gavica; Annie’s sister and heroine of the day. Esther’s sister could have also been part of the rescue team, but she was never reached because Esther kept dialing the wrong number. Of her own sister.

Anymore, most of us think of our phones not as a gadget but as an additional limb. We’re forever connected to the digital world, always available by chat, email, or text message, while we share our location on Twitter and Facebook. However, being able to track a lost iPhone using a computer while its location is broadcasted by the built-in GPS from the backseat of a white and green taxi cab because someone forgot it only one day after buying it, comes in pretty handy.

Anyway, like I was saying. Ysabel and Esther check the iPhone location one more time before jumping inside the car in what would be the beginning of a nerve-racking three-hour wild chase. First stop, Fairview and Maple Grove. Martin is on standby. Annie and Alaina had both been alerted by voicemail. Our girls quickly arrive to their destination, but there is no sign of the green-striped cab. They reach out to Martin only to find out he left his computer at work and the iPad is no good in this case: only a computer can track a moving iPhone. Rats! I get the call, but I’m at Walgreens. I’m just as useless as Martin. Alaina calls.

The girls set out towards Cole.

“He turned onto Swift Street!”

The girls make a left. Then silence. After what seems like an eternity, Alaina calls back to save the day.

“The target is no longer moving. It stopped at Cole and Northview”

The Northview Family Worship Center stands right there, its two white golf ball-looking domes shinning under the morning light. I arrive to find the girls parked right by the taxicab (I needed a key to the fronton). They look so happy, so proud of themselves. Sherlock and Watson. Martin Riggs and Roger Murtaugh. Frodo and Sam. Smiles all around, and Esther’s iPhone resting comfortably between the driver and copilot seats in its black and pink polka dot cover. Shortly afterwards, the service is over and the taxi driver walks out of the church.

“I take you want your iPhone back?”

One thought on “Buying, then immediately losing an iPhone – Stages: 1) Elation and celebration after the purchase, 2) Hangover and Heartache after the loss, 3) Determination to recover your “precious”, and 4) the Hallelujah!”