I’ve been sitting at the kitchen table for about an hour, thinking about a good start for the post, but nothing is clicking. Like every Athletic fan out there, I’m still recovering from the excitement of a potential victory in an important final and the subsequent disappointment when our team lost for the second time in two weeks. I guess I’m just having a hard time getting past the sadness and acknowledging that the Gabarra will have to stay docked at least another year. 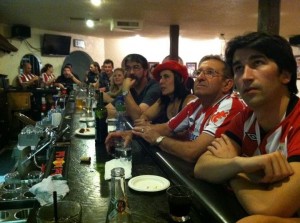 I wish I’d paid more attention, focused more on all the details when I had the chance. I was about ten years old when my mom piled me and nine of my closest friends in her little white Seat 133 (4-speed, no power steering, no power anything for that matter, and obviously no regard at all for traffic laws), and set out from Ortuella towards the nearby town of Portugalete. I can’t even remember if we were celebrating Athletic’s first place in the Liga (1982-83) or the Doblete (Liga and Copa) the following year, but when you are a kid you don’t think it’ll be the last time you’ll experience something that special. All the schools closed and I’m pretty sure nobody went to work that day. Virtually the whole population of Bizkaia gathered on both sides of river Nervión: from el Puente Colgante in Portugalete to San Anton in Bilbao, more than a million people showed up to cheer on our team.

Twenty-eight years later we had another chance to blow the dust off the boat and savor the taste of victory. I thought about my friend’s little boy, Aitzol, all decked-out in his Athletic gear on his way to Madrid to watch the final with his parents. What an amazing experience it would have been for him, a six-year-old who only breathes in red and white.

Yesterday, Aitzol and people back home were not the only ones feeling the Athletic colors. Boise’s Basque Center was no different that any of the bars in Pozas, the street by San Mamés stadium where everyone gathers before and after an Athletic game: red and white jerseys all over the place, ikurrinas fluttering around the outside of the Center, wine and kalimotxos flowed all evening long.

The Basque Center, in conjunction with Euzkaldunak, Inc., organized the event for Basques in Boise to see the game in a Basque Country atmosphere. It was great to get to the Center and see how everyone showed up in full force and in full gear, excited by the possibility of becoming champions for the 24th time. Unfortunately, it didn’t take long for our excitement to dwindle, two minutes to be exact. That’s how long it took Barcelona to score the first goal; the second and third didn’t take much longer to arrive. We all cursed the first half and crossed our fingers that the second half would be better. It wasn’t meant to be. Pre-game joyful faces were long when the 90 minutes were up, and some of us even had red, teary eyes that we blamed on the empty bottles of wine sitting on the counter.

Then, I went around  to get people’s impressions on the game, their feelings, what the best part was. And this is what I took home:

“The most important thing is to be here, surrounded by Basques and celebrate the day. Soccer is important, but being Basque is better.” Josu Zubizarreta.

If you want to see more pictures of the event, click here to open the Picasa Web Album.

The Lions of Bilbao: A view from the outside
EUP!
Once again, Athletic gets a jab at his ‘Basque-only players’ philosophy