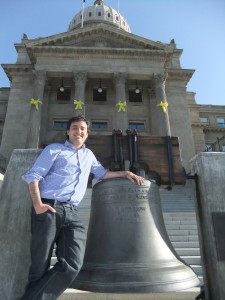 Last year I met Xabier Uribe-Etxebarria, Anboto’s CEO, during one of his visits to Boise. Anboto is a Basque Web Customer Service and eCommerce firm based in the Basque Country. At the time I met Xabier, they had offices in Erandio-Bilbao, Basque Country, and Redwood City, CA. The Boise office was still in the works. I was very curious about Xabier, his company and their future plans, so I asked him if he’d be willing to sit down for an interview with A Basque in Boise, to which he happily agreed.

Today, EITB.com announced that the opening of the new office in Boise is official.

According to the article, “the firm mentioned they chose this new location for two different reasons. On the one hand, Boise, in the Western United States, is home to a large Basque-American population. On the other hand, Boise is one of America’s most livable and likable cities. With a population of 211,000, Boise offers the culture and entertainment of a large urban area in a place that feels a little like everyone’s hometown. In fact, several Fortune 500 companies call Boise home. Micron, Boise Cascade, The Washington Group, and Hewlett-Packard are some of the big names housed in Boise.”

To read the article in its entirety, click here.

If you want to read A Basque in Boise’s interview with Xabier Uribe-Etxebarria, click here.