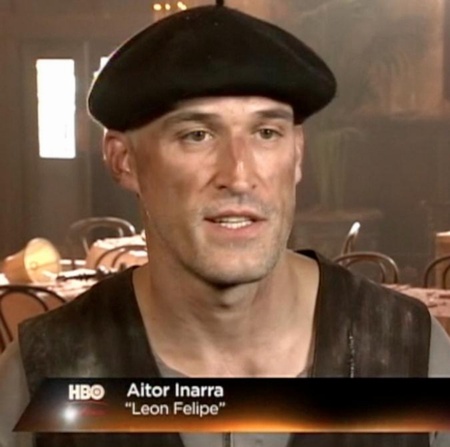 The movie has a very special meaning for the SFBCC. Not only was it filmed in San Francisco, but most importantly, the center’s very own Basque language teacher, Aitor Inarra, has a role in it as “Leon Felipe”. Aitor, who is originally from San Sebastian, will join the audience at the viewing party.

I met Aitor last year during the Basque language workshop in Boise. I didn’t know I was in the company of a famous movie star until class was over and we were all in the Basque Center’s patio having a drink, at which point I immediately demanded getting a picture taken with him. If he ended up being a superstar (and it looks like he’s on his way), I wanted to have more than my word when I told people I knew him.

Hemingway & Gellhorn recounts one of the greatest romances of the last century – the passionate love affair and tumultuous marriage of literary master Ernest Hemingway and the beautiful, trailblazing war correspondent Martha Gellhorn – as it follows the adventurous writers through the Spanish Civil War and beyond. As witnesses to history, they covered all the great conflicts of their time but the war they couldn’t survive was the war between themselves.

Come back to A Basque in Boise next week for pictures of the event and an interview with up-and-coming actor, Aitor Inarra.