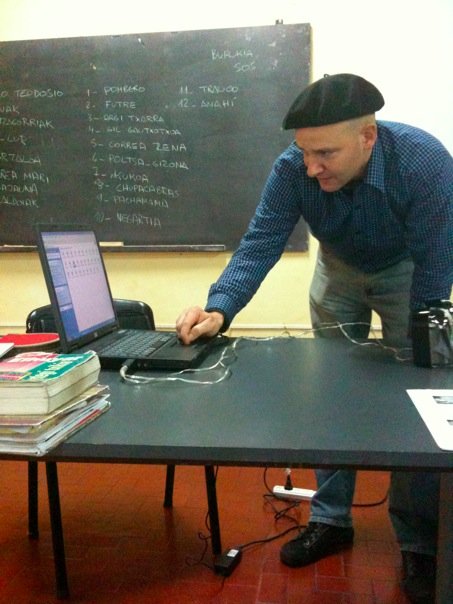 I mostly talk about Basque events and people from North America, and especially Boise or Idaho, because that’s where I live. However, there are people in other parts of the world that work just as hard to make sure the Basque culture, language and traditions don’t become something of the past. I saw it first hand in 2009, during the week-long winter barnetegi (Basque language intensive course) in Las Flores, Argentina. That’s where I met Leonat Egiazabal, from Uruguay, my group’s teacher for the week. I noticed right away that he was totally devoted to the Basque language and culture.

I was pleasantly surprised and very proud of him when I read his interview with Uruguayan newspaper El Pueblo de Salto, published in English on the Euskalkultura.com website. There, and among other things, Leonat talks about getting in touch with his Basque roots as a young child thanks to his grandmother. However, it wasn’t until years later, when he was 17, that he started to study the language and culture by himself. He also talks about traveling to the Basque Country and describes the dynamics at of Montevideo’s Basque Center.

Leonat and I will meet again this summer in San Sebastian, during the Excellence in Basque Studies workshop in July. But before we do,  I wanted to ask him about his plans while in the Basque Country.

Q. You are Basque Country bound this summer sponsored by the Etxepare Basque Institute. What are your plans for the month of July?

My plan is to visit friends throughout the Basque Country, in Navarre Zuberoa, Gipuzkoa, and some in Bilbao as well.

There is a long-term project to document the local Basque dialects by recording interviews, which will then be part of a bigger project already in progress in the Basque Country. However, there are still quite a few details to be worked out, so for now, I will use my time there to learn more about the project before diving into it. Then I will decided if I move to the Basque Country in the winter to work more in-depth in the project.

I have also been invited by Jean Bordaxar to attend this year’s Pastoral, “Mendiage”. He’s a bertsolari that lived, sang, and died in Uruguay, so I am excited and honored to be part of the event.

I will meet with musician Mixel Etxekopar again, who will let me play a ttun ttun if I promise to go back to Uruguay playing the instrument. I will do my best to practice and keep learning about Basque traditional music, thanks to Mixel’s generosity and patience.

Q. Can you tell us more about the Etxepare Basque Institute project?

I’ll be attending the Excellence in Basque Studies workshop at the University of the Basque Country in San Sebastian thanks to a grant provided by Etxepare. The institute reached out to Basque language teachers spread among universities all over the world with a proposal to improve and update the cultural content of our programs.  Even though this is the second edition of the Basque Studies workshop, it’s the first time attending for me.

Q. After your stay in the Basque Country, you will go back to Montevideo, where you are a professor at the university. Apart from your daily work, what else occupies your time?

A couple of weeks ago we started a program, very fun in my opinion, to encourage people to gather and practice their Basque. It’s called “Montebieoko bira tabernaz taberna” (A tour of Montevideo from bar to bar). We visit iconic bars in our city, as well as those less known bars which unite the neighborhoods of Montevideo. It’s a great excuse to speak Basque and have a great time with the students and other Basque people around town.