(Artikulua euskaraz irakurtzeko, sakatu hemen. Para leer el artículo en castellano, hacer clic aquí. I don’t know how to say it in French, but there is a version too.) 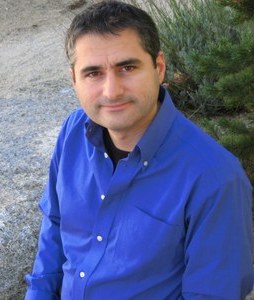 Fellow blogger Pedro J. Oiarzabal, PhD in Basque Studies – Political Science from the University of Nevada, Reno and a researcher on Migration Studies at the Institute of Human Rights at the University of Deusto in Bilbao, Spain, was contacted this summer by Jeffrey Gerson, Editor Producer at the Communications Department at Facebook, to write a story on the Basque Diaspora and its relationship with social media. He centered his article on former Basque sheepherder, Dionisio Choperena, who in 2000 starred in an AT&T television commercial to introduce their wireless service.

Soon the story will also be published in Basque. I will add the link as soon as I can.

A Basque in Boise reached out to Pedro Oiarzabal to find out how he feels about his accomplishments in the social networking arena and to highlight, here as well, his efforts and accomplishments as the Basque Diaspora’s guardian.

Q. Did you know about the Facebook Stories section before being contacted by Jeffrey Gerson, Editor Producer at the Communications Department at Facebook?

Pedro Oiarzabal. I heard some rumors regarding the possible launch of a Facebook site on different specialized websites dealing with social media news. But, at the time, that was all I knew.

Q. Were you surprised when you saw Jeffrey Gerson’s email asking you for a story on Basque Diaspora as it relates to social networking?

What surprised me the most about Jeffrey was the actual knowledge of my latest work on diaspora Basques and Facebook, which had actually been published a few weeks before he approached me. This is not very usual. I wanted to meet him and visited the Editorial team at Facebook headquarters in Menlo Park, California during this past summer; back then I was carrying out fieldwork in the American West. We quickly came to a common understanding of the type of writing that they were looking for, and began working together on editing different drafts. Jeffrey has been pivotal on the fine article that has turned to be. I am very grateful to him and his colleagues at the Facebook Communications Department.

Q. How does it feel to know your initiative has grown so much and has such an impact that even Facebook, the largest and most influential social networking site, paused and took notice?

I am thrilled for the Basque diaspora, for those Basques who, against all odds, love Euskal Herria, and have been able to maintain strong emotional ties regardless of physical, temporal, and emotional separation. It has been a love story between David and Goliath, between the global and the local, where Facebook has met the Basques and the Basques have met Facebook. On a personal note, it has meant recognition of my academic work and research on the Basque diaspora and its relationship with emergent technologies. We all should be proud.

Next, I am re-posting the article in its entirety, as it was published on the Facebook stories website.

What happens when more people live outside your homeland than within it?

In 2000, an AT&T television commercial starred Dionisio Choperena as part of a quarter-billion-dollar campaign to introduce wireless service with the slogan, “Your world. Close at hand.” Choperena, a Basque immigrant, came to the United States at 17 to work as a shepherd, first in Wyoming and later on in California. The ad depicts Choperena and his flock in rural, rolling hills, communicating via cellular phone with people as far away as Japan or New York.

As Choperena talks into his phone, each person he called appears among his flock—the distance suddenly bridged. A voice-over in the commercial asks, “What if you could be far away and still be close to everyone and everything that’s important to you?” It was a message that had to strike close to home for Choperena. Maintaining instantaneous and reliable connectivity with loved ones back home would have been a dream come true for anyone among the Basque diaspora in 2000, and now, just 12 years later, it’s coming to fruition.

Euskal Herria, or the Basque Country, is a region situated at the border between France and Spain on the western Pyrenees. It holds a total combined population of nearly three million people — yet, surprisingly, they are the minority of the Basques worldwide. The total size of the worldwide Basque population is especially difficult to determine, as there are many ways to define ‘being Basque’ (e.g. by birth, by ancestry, by ability to speak the Basque language etc.). Nevertheless, the most reliable estimates figure the population at around 4.5 million people. This now means that there are 1.5 times more Basques outside of the homeland than there are within it.

Diasporas like the Basques are composed of migrants who share a collective identity in their homeland and have left by choice or by force, often a result of structural socio-economic or political conditions. In their new homes, these migrants and their descendants maintain and develop cultural, religious and political expressions of identity. Collectively, they develop an identity distinct from—yet tied to—the dominant culture of their homeland.

This separation, both physical and psychological, makes a diaspora more vulnerable to cultural erosion and evokes varying degrees of nostalgia and longing. Issues of communication and contact—and the technologies that support them—become acutely important. They hold the potential to reduce not only physical distance, but also the emotional distance between migrant diaspora communities and the homeland.

Basques have often made significant efforts to retain a connection both with their homeland and with co-diasporans. They’ve used a variety of networking resources—from mail, telegraph, and telephone to the Internet—to overcome the barriers of distance. Most recently, Basques have begun to make up for lost land by ‘colonizing’ a new frontier of digital landscapes—webscapes—in order to maintain their language and culture. Between 2005 and 2007 free-standing websites dominated the Basque webscape, while the 2007-09 period was characterized by the rise of social network sites: first blogs, then MySpace, and now Facebook.

As of August, 128 Basque associations have established formal presences on Facebook. Since the site is available in Euskera, the Basque language, Basques can immerse themselves in their language while interacting with one another on the site. Physicist Blas Uberuaga, a Basque born in Caldwell, Idaho, built the first Basque website in 1994. He says he recognizes the benefits of the move to a social platform. “Social network sites such as Facebook offer to Basque diaspora associations and their members the ability to share information, generate excitement about the organization, and communicate with organizations far from home,” Uberuaga says. “They help connect to other groups, especially groups in Euskal Herria, giving those in the diaspora a little bit more knowledge about current events and issues happening there.”

These new means of communication mean Basque news, be it social or political, is no longer dependent upon formal euskal etxeak, or Basque associations, for dissemination. That in turn allows for a wider network, one untethered to any managing establishment. “When a Basque-themed item is posted on Facebook by one of my friends, and I in turn comment on it, my entire network of friends will see it,” says Patricia Poydessus Cavan, a second-generation Basque from California. “An old college friend of mine found me on Facebook and, after looking at my profile, noted that I have maintained my Basque ties over the years. When someone posts something positive about the Basque Country, it reinforces my pride in my heritage.”

Groups, especially, have proven useful to Basques on Facebook. José Antonio Alcayaga III, born in Stamford, Connecticut, created a group in 2008 to unite those who share his last name. Currently, “Alcayagas of the World” has over 1,500 members. “I use this group,” Alcayaga says, “to disseminate family history with the intention to create a large family tree and to educate family members of their Basque ancestry as well as to share Basque related news and cultural events with my friends and family.” Others who have made the move from their homeland have found surprising results in their networking efforts. Henar Chico, who was born in Bilbao, Spain but moved to Idaho over a decade ago, tells of how it took crossing the Atlantic to meet a neighbor — me. “Though living a few miles apart from each other in the old country, we met online at least three years ago.” We finally met in person during this summer in her adopted town.

Old photos especially generate excitement in Basque groups. It’s normal for conversation to quickly turn to identification, with members calling out “lost” or “forgotten” relatives from the old country. These exchanges are often highly emotional for some as they reconnect with their origins through this visual genealogy. Ana Inchaurraga, whose great-grandparents migrated to Argentina, says these exchanges meet a basic human need “to feel part of a virtual space that facilitates a fast connection with friends, with photographs and information that are meaningful and representative to your identity.”

The history of the Basques has always been mobile, both inside of and across geographical borders. From early commercial entrepreneurship in Europe, whale hunting in Newfoundland to Atlantic trade between the New and Old worlds, Basques carved out new lives in widely diverse ends of the labor industry, in widely disparate places. Now, with an organized presence in over twenty countries throughout Europe, North and South America, Asia and Oceania, the web has, for many, become “home.”
__

Pedro J. Oiarzabal holds a PhD in Basque Studies – Political Science from the University of Nevada, Reno and is a researcher on Migration Studies at the Institute of Human Rights at the University of Duesto (Bilbao, Spain). He is interested in the social, cultural and political implications of information and communication technologies regarding migrant and diaspora communities, with special emphasis on the Basque people. Among his latest publications is Diasporas in the New Media Age (2010). He also writes the blog “Basque Identity 2.0” for Basque Radio and Television Group and coordinates the “Euskal Diaspora” group on Facebook.