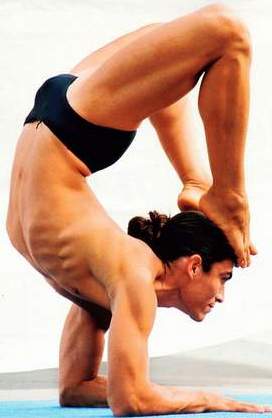 My friend Laurel – who’s kept my ego strong with her funny comments since discovering my blog a few months back – asked whether I’d write about my experience with hot yoga last night. I can’t remember what I told her. I was more concerned with making sure I was still alive and breathing while simultaneously trying to cool myself down from one hundred and eighty degrees.

It was my first time at a hot yoga class. I was drenched in sweat from the second I laid the mat on the floor, and I felt dizzy several times during the class. However, I’m proud to announce that I didn’t puke not even once. I’m not sure what was worse, the grueling succession of hard-core poses inflicted by the yoga instructor or having to stare at my reflection in the mirror for 90 minutes straight. It’s HOT yoga, ok? So you dress like you’re going to the beach. Literally. Most women there wore nothing more than a bikini. Not me, though. I had just played a game of pala so I had my white skort (I hate that word), which covers my rear-end quite nicely, although I did wear a sports bra. And you know how you twist and turn with each yoga pose. I discovered rolls I’d never seen before. Plus I swear by flip-flops in the summer (and fall, spring, sometimes winter), so I don’t have the smoothest heels and I had to keep my socks on all the way through in order to avoid grossing out the other people in the class. Right there, an extra 4 or 5 degrees I didn’t need.

I ended up signing up for 14 more classes. Stretching and stuff makes you feel good, but my ultimate goal is to fit in one of those cute little hot yoga outfits I saw hanging on the wall outside the class without scaring the world. As a first step, I started with the heel-healing process last night before I went to bed. It looks to me like I’ll be wearing socks for a while.

(Fine, we didn’t do that pose from  thebluestmuse.blogspot.com, but that’s how it felt most of the time.)