I realize I could have been a little quicker on this one, but I just got around to browsing Boise’s Basque Museum fall newsletter. So Bar Gernika’s 21st anniversary took place about three months ago, but hey, it’s never too late to read about it. I’ve lost count of how many times I’ve been to Bar Gernika to get my double solomo sandwich fix, but I didn’t know all the details about the bar’s history and how it all came about. 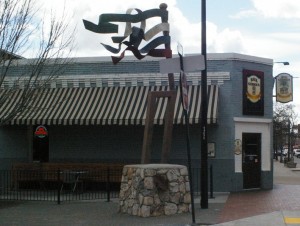 Bar Gernika celebrated a special milestone on Thursday, June 21 st, as it marked it’s 21 st year as one of Boise’s longstanding restaurants and local pubs. Jeff May, owner of Gernika since 2008, decided to roll back some of the prices to the first, 1991 menu. Twenty-one years ago a solomo sandwich with a side was $3.75, a chorizo sandwich with a side was $2.75 and croquetas were $1.50. All of their draft beer, wine and kalimotxos were half price that day. Needless to say, the 21 year old prices were much appreciated by both regular and new customers as they gathered at the Gernika Pub & Eatery at 202 S. Capitol Boulevard to socialize, reminisce and have a great meal.

In 1990, what was the Cub Bar building, was slated for demolition as part of newly-acquired property to build a bank and parking area on the corner of Front & Capitol. Basque Museum & Cultural Center board members, Adelia Garro Simplot and Romaine Galey Hon, seeing the need to save this historic building that was in a prominent location along Capitol Boulevard, worked under the legal advice of Willis E. Sullivan III, and with property managers, Oppenheimer Corporation, to negotiate a deal with the Mountain West Savings Bank so that the building would not be razed and replaced by four parking spaces. The bank was allowed to use spaces behind the Basque Museum in exchange for a lease on the building to the Basque Museum. Dan Ansotegui (now part of local Basque band Amuma Says No) had the vision and dream to work diligently to establish Bar Gernika. Dan’s first proposal to the Basque Museum board of directors was for a pub and eatery called ‘The Shepherd’s Son.” He later decided on the name, “Bar Gernika” because it only seemed logical since there was a “Bar Boise” in the city of Gernika. In 1998, a permanent land transfer was negotiated between the Bank of America and the Basque Museum to exchange the Bar Gernika property, including some additional property to the south so that Dan Ansotegui could expand the building, for the parking area behind the main gallery of the Museum. The Basque Museum & Cultural Center owns the building, but Jeff May owns the business.

The Gernika Basque Pub & Eatery was recently recognized in the Food Network Channel’s “50 Sandwiches in 50 States” as Gernika’s Lamb Grinder was selected as the representative sandwich for Idaho. Thin slices of tender marinated leg of lamb on a fresh french roll with a light lamb sauce for dipping. with grilled onions, peppers, mushrooms and swiss cheese. Many patrons who stop by the Museum after lunch who have tried this delicacy just can’t wait to return for another!

This isn’t the only time that Bar Gernika has received national recognition as it continues to welcome patrons who come for a meal because the restaurant was featured and appears on re-runs of Guy Fieri’s “Diners, Drive-Ins, and Dives,” program originally filmed in March, 2009.

The Gernika Pub & Eatery is an anchor for the Basque Block and remains as a great representative for the Basque community. Dan Ansotegui began a wonderful tradition of good food and a welcoming atmosphere back in 1991 which Jeff May continues today. The Basque Museum & Cultural Center is grateful to have this business as a tenant with Jeff May at its helm.