For music, that is. 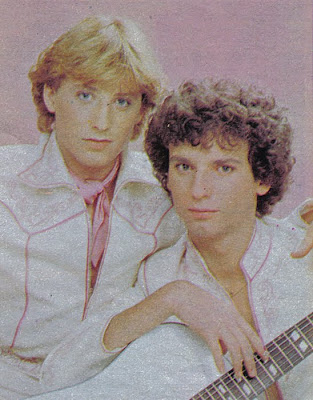 Yes, it is time indeed to reveal another secret. Judging by my previous playlists (eclectic, edgy), my witty posts and totally informative articles, you probably think that I’m a funny, intelligent, progressive, well-rounded person. (I’m rounded alright, but that’s not what I’m talking about).

In reality though, I’m a nerd, a music dork stuck in my mother’s past. My apologies to those of you who have never heard of Los Pecos or “Un velero llamado libertad“, but my childhood and teenage years went by almost exclusively in Spanish. Hey, at least I got one of the requirements down for appropriate playlist making — same language. Shit, I might even get the second one right too — style.

You know, these songs might be cheese as all get-out, but they shaped my youth in one way or another, and I love them all.

1. Me colé en una fiesta (Mecano) – Pretty much the first band that comes to mind when I think of the 80’s, and they might have been the first ones I saw in concert.

2. Qué dolor (Raffaela Carrá) – Well… crap! Two songs into the playlist and I already screwed up. I gave it my all, but I just couldn’t find the Spanish version of the song, so Italian it is. (Breathe in, breathe out, I’m ok, I’m ok. I’m still worthy). I haven’t been to Ortuella for Christmas in the last few years, but I bet my right arm they still play this song at Txutxi’s bar on New Year’s Eve, right after Vivir así es morir de amor, if memory serves me right.

4. Háblame de ti (Los Pecos) – Their voices might sound funny (more like gay, actually, but I’m giving a shot to this politically correct business they got going in the US), but their message is timeless. (Translation is from Google Translate, handle with care).

5. Un velero llamado libertad (Jose Luis Perales) – The Lurgorri camping trips (think Boy/Girl Scouts) wouldn’t have been the same without this song. All the kids sitting around the fire, I forgot who it was with the guitar… And the same goes for #6 and #7.

7. El vendedor (Mocedades) – To this day, this group from the Basque Country is one of my favorites. Check out Maitechu mía and Amor de Hombre. Awesomeness, as far as oldies is concerned. Even if you didn’t like the songs, you can’t tell me you didn’t flip out with the clothing!

8. Don Diablo (Miguél Bosé) – That he got here, from there, blows my mind.

9. Devuélveme a mi chica (Hombres G) – From the Spanish movie Sufre, Mamón soundtrack. Yes, I saw it. I liked it. What?

10. Champú de huevo (Tino Casal) – I too have no words. It was a toss-up between Tino and Locomía, but in the end I decided to stay in the 80’s and Spanish, for the sake of my playlist’s integrity.

11. Bailar pegados (Sergio Dalma) – Eurovisión, how much I miss thee. Besides, I just couldn’t let you go with Locomía on your mind.

4 thoughts on “The time has come to declare my love”