I warn my daughter sometimes about running out of words if she keeps it up. She can talk non-stop for hours at a time to her stuffed animals, friends or even herself. The thing is to make up stories that she’ll sometimes record on the iPad for double the fun. Although it makes it difficult to concentrate when I’m looking for that particular word while doing a translation, I love listening to her ramble stories away on Saturday mornings, the first day of freedom after an entire week of hard work at school. She already has four chapters in 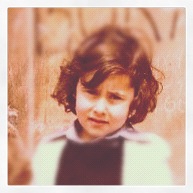 her “Princess Nasty” series, and a couple in “Journey To The Throne”, where her stuffed animals compete on looks and fashion. I marvel at her vivid imagination and wish I could steal a little for myself. I too wanted to talk about a princess today, “The Pouting Heiress”, who used her magic pouting powers to get what she wanted until she ran out of people to pout to.

Then, I don’t know why, I thought about Acutún and Jariles, two really good friends from my childhood I had long time forgotten. They’d come everywhere with me, even to the bathroom (which was great because usually nobody wants to stand around while you work out your stuff and it was way more fun talking to them than being alone). They’d stick themselves to the tiles on the wall, eyes and ears wide open (nose closed), waiting expectantly to listen to my newest adventure. My parents would laugh and make fun of me lovingly when they heard me talking alone, but just because they were not able to see them, it doesn’t mean my friends didn’t exist. You know, like Santa Claus and the Tooth Fairy. As I grew older though, I gradually stopped talking to them. Their visits became scarcer until one day they didn’t come around anymore and I didn’t even miss them.

Now, I’d love to see them again, introduce them to my daughter. Would they return if I called them up? Probably not. They’d be afraid I’d hurt their feelings again.