Sorry to bombard you with updates today, but some days are busier than others, what can I say. Besides, this latest story by Lauren Frayer for NPR is quite interesting, so I’m sure you’ll thank me after all. The article talks about how the economy in the Basque Country is flourishing as opposed to the precarious economic conditions faced by Spain.

By Lauren Frayer
October 25, 2012
Audio for this story will be available from All Things Considered at approximately 7:00 p.m. ET

For decades, most of the news out of Basque country was horrible. Since the late 1960s, this region in northern Spain has been infamous as home to the ETA separatist group, which killed more than 800 people while fighting for Basque independence from Madrid.

But two years ago, the separatist group declared a final cease-fire and the attacks have stopped. Now the country is becoming known for something else: its booming economy.

Machines meld molten steel into train cars at one of the region’s most successful companies, CAF, which makes trains for Amtrak, the Washington D.C. metro system and light rails in Sacramento, Pittsburgh and Houston.

While the rest of Spain’s economy is forecast to shrink nearly 2 percent next year, CAF is growing by 10 percent a year. Companies like this keep the Basque unemployment rate down around 12 percent — less than half of what it is in the rest of Spain.

“We are disconnected from the Spanish economy, I would say, almost totally,” says Aitor Galarza, an engineer and spokesman for CAF.

Basque country has a unique tax system with fiscal autonomy from Madrid. CAF exports 77 percent of the trains it makes. That’s typical for Basque country. People here make up about 4.5 percent of Spain’s population, but they contribute nearly 10 percent of Spanish exports.

Economist Fernando Fernández at Madrid’s IE Business School says the Basque region is rich in natural resources. And for centuries, it was easier for Basque traders to sail north to England, rather than ride horses over the nearly 10,000-foot mountains that separate the Basque country from Madrid.

“They had mines there. There was steel, and there was coal. And they were very close to England. So they were exposed to the industrial revolution much earlier than other regions of Spain — much earlier,” Fernández says.

On top of strong exports, the region also has a vocational education system more like Germany’s than Spain’s. 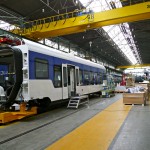 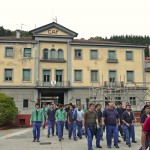