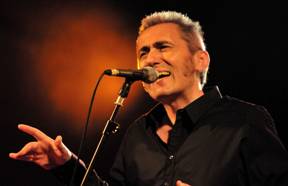 This time around Jabier Muguruza presents his eleventh album of songwriting entitled “Bikote bat”. For this project, the intimate mood fraught with silence which has always defined the artist’s work  is given an extreme focus: only a piano, played by Mikel Azpiroz, and Jabier’s vocals and accordion, plus the occasional intervention of the female singer Mireia Otzerinjauregi.

These songs stem from texts by a bunch of great Basque poets whom the artist counts now as customary collaborators, such as Bernardo Atxaga, Iñaki Irazu, Harkaitz Cano, Gerardo Markuleta and José Luis Padrón, to which must be added this time the names of Lourdes Oñaederra, Rikardo Arregi and, in the Spanish language, Javier Rodríguez Marcos.

The sessions took place in two stages: first in the El Vendrell auditorium, where Mikel Azpiroz performed the piano parts; next in the Katarain studios in Azkarate, Navarre, where Jabier Muguruza’s voice and accordion and Mireia Otzerinjauregi’s backing vocals were recorded with Ángel González Katarain engineering.

The result is the most mature work that the artist from Irún has released so far, and its lyrical and compositional level is really outstanding. To the listener, already from the very first bars, it appears unquestionable that the complicity that is established between Mikel Azpiroz’ subtleness on piano and Jabier Muguruza’s vocal nearness works in a brilliant and always alluring way.

To all that must be added a special collaboration by the American singer Jackson Browne.

In short, we are before a veritable balsam, a delight for our ears in these times of noise, confusion and hurriedness.