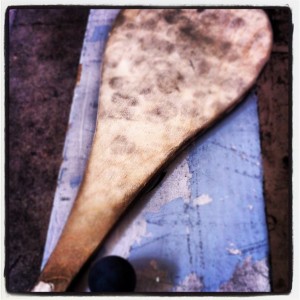 It’d been changing for a while, and then on Friday, it froze. Since then, it’s been gloomy, it’s been gray, and it won’t stop raining. I’m cold even though I layer up and use a blanket on the couch. I turned up the heat and added another comforter to my bed, but it’s still chilly.

I only managed to warm up a bit during pala practice on Saturday and the make-up game we played this morning. (Halloween falls on Wednesday this year and my kids would kill me if they had to watch me play instead of trick or treating.)

I haven’t been practicing as often as I did a few weeks ago. All pala leagues are in full swing and work has been crazy, so finding time alone in the fronton has proven to be almost impossible. I miss the sound of the ball against the wood after a good swing. I miss the sound it makes when it hits the wall. I can swear as loud as I want if I can’t return my own serve. I get rid of my frustrations, one rebound at a time. You can break down and no one will know.

Forgoing a dream is not easy, although it can get you closer to another. I’m older, I have a lot to learn and time is working against me, but practice makes perfect. Lucky for me, it’ll probably take years to let it all go, so I’m extremely excited about the many pala practices my future holds. Being part of an international pala tournament some day might be doable after all.

4 thoughts on “Fighting the cold”