The Diaspora actively promotes its identity through dancing, gastronomy, Basque games and cultural events. Basques are committed to maintaining their roots and very successful at it. Just check out this pictures from 1972 in Boise, Idaho, USA, or this video from 1977. Now compare them to images from the latest Jaialdi celebration in 2010. Not much has changed, has it?

However, Basques abroad are also different from their neighbors in the Basque Country, especially in connection with their dual identity as Basques and whatever their native country might be.

The Euskal Etxeak or Basque Centers play a key role in the lives of Basques abroad, acting as gathering points for them to socialize, learn, and hold meetings. They are well-organized (under NABO or North American Basque Organizations in North America, and FEVA or Basque-Argentinian Federation of Entities in Argentina, for example), and collaborate frequently among each other and with organizations from the Basque Country on events such as Jaialdi, Basque language immersion programs, or Gaztemundu.

And now, five years after its first run, Basques abroad have yet another way to keep connected by listening online to 8 Herrialdeak Zuzenean (it only works when the program is on). It is the first radio program for and with the Basque diaspora, aired in four languages: Basque, English, Spanish and French. You can listen to it every first Sunday of the month on the 8 Probintziak website. There, you will also find a wealth of information about the latest happenings in the Diaspora in the form or articles, photos and videos, plus RSS feeds to various blogs and news sites, such as Buber, Euskalkultura.com, even this very blog, A Basque in Boise.

Benoit Etcheverry Macazaga, a Basque native from Iparralde, started the program in 2004 and ran it until 2007, when he took on some other projects – always related to the Basque diaspora. Benoit had hoped for the radio show to continue airing, but nobody picked it up. This is why, five years later, he decided to bring the program back. 8 Herrialdeak Zuzenean airs from 8:00 to 9:30 pm (Basque Country time). The next installment of the program is coming up this Sunday, November 4. In the meantime, I leave you with audio of the first program aired after the 5-year hiatus, followed by an interview with its creator. 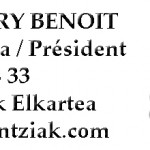 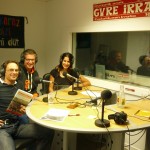 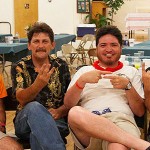 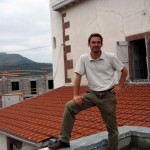 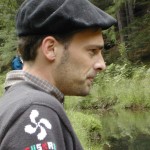 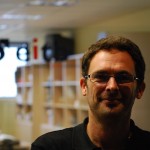 An interview with Benoit Etcheverry Macazaga

A Basque in Boise.  I have been reading about you and I know you’ve worked for EuskoSare, France bleu Pays Basque plus you collaborated with Euskadi Irratia and EITB. I know you live in Iparralde but also that you are with the Diaspora now and always, why?

Benoit Etcheverry Macazaga. I’m 40 years old, married (I met my wife at the Euskal Etxea in Paris), and we have five children.

I started working for and with the Basque diaspora 11 years ago, when I was president of Udaleku (or summer camp), here in Iparralde. I learned that there was an Udaleku in the USA too, so I called the number I’d found on the Internet and I realized how rich the Basque presence. I discovered Basques in the US, but also all over the world. I was surprised.

I knew, like many Basques here, that virtually every family has a cousin in the diaspora, but to discover that there are more people with Basque roots abroad than in the Basque Country, well, that’s what drives me. Later, I went to see some institutions to present this fact, Basque presence around the world, but they didn’t listen to me. They laughed about me (also Basque institutions from Iparralde). Now, 11 years later, we can see how things have changed.

We created an association in 2004, 8 Probintziak Elkartea, because we thought this work should be recognized one day, not only by the institutions but also by the diaspora. The objectives of 8P are: to present the current reality of the Basque diaspora to the Basque Country, and conversely, the current reality of the Basque Country to the diaspora. We help companies develop their business with the Basque diaspora, aid students to find a stage, and we create new ways of communication (we participated in the translation of Facebook to Basque, we do a radio show, are active in social networks, etc.)

As you can see, it is much more than a non-profit organization; it is a passion. I teach that to my children, I say, “open your eyes and look, open your ears and understand.”

Q. How did the idea for the program first come up?

In 2004, I realized about the power of the Internet, and the potential new technologies could offer us for communication, genealogy, etc. At this time, I was receiving a lot of messages from the USA, Argentina, Chile, Australia, Poland, etc. In the end, I needed more time, to answer them all, so I searched for a solution and doing a radio program is what I found. However, how could we be understood by all? And that’s when I decided to do it in four languages. No one had done it before, but because no one did it, it didn’t mean it was impossible!

Q. So, after a five-year hiatus you decided to bring the radio program back. Why now?

Between 2007 and 2012 I was also working on promoting the Basque diaspora with a new project, the international center of the Basque diaspora in the town of Azkarate (lower Navarre). At the same time, radio station France Bleu Pays Basque asked me to do a radio show in Basque about the Basque diaspora. One show, one interview in Basque with a Basque person. The show was called Euskaldunen Mundua (the World of the Basques). I did it for 2 years. At that time I also started writing for a newspaper La semaine du Pays Basque.  I had my own page: les basques d’ailleurs (or Basques abroad).

I thought somebody would have picked up what we started years before, but that wasn’t the case. Therefore, along with we Robert Acheritogaray (from California, now living in Ortzaize, brother of Philippe Acheritogaray) and Adelaide Daraspe (president of Euskaldunak Quebec, Montreal’s Basque Center), we decided to bring the show back once a month, on the first Sunday of every month. Our goal is to share knowledge about the Basque diaspora. It’s not amazing to do that, it’s normal. What is amazing  is that no one has tried to do that before.

Q. The program airs on the first Sunday of each month, at 8 pm EH time, are there any plans to air the program weekly or bi-weekly? Why or why not?

The program airs the first Sunday of every month, and we are going to keep it like that for now. It takes a lot of time to prepare a program and most of us also have a life with our families and our jobs. However, if people from the diaspora listen to us, call us, send us messages, maybe things can change. We are just staring though, so we need time to evaluate the impact of the program. You can participate in the program by calling 00 11 33 559 59 60 30 or by e-mail at irratia@8probintziak.com.

How is it structured? I heard the first installment and it was done in the four languages (Basque, Spanish, French and English). Is that typically how it will be done?

Each program focuses on one subject, but then we also spend some time talking about news from Basque centers around the world.

The first part of the second program will center on Basque gastronomy around the world, with Mattin Noblia and Alphonse Acheritogaray. During the second part, we will receive singer Naia Robles to talk about her trip to Argentina during the national Basque Week in Rosario. Then news, games (thanks to our www.euskal8.com) and of course, very important: the weather.

All we say is translated in three languages because people listen from the US or Argentina, for example, but also from the Basque Country. Why doing a radio program if we are not going to be understood?

Q. How do you decide what topic you will cover? Can people ask to be on the program or do you have to get in touch with them first?

We read news from the Basque Centers using very good information sources like euskalkultura.com or euskalkazeta.com, and we also receive newsletters from some of the centers. I personally receive the San Francisco Basque Club’s newsletter Aldizkaria at home by mail.

Q. Your website has a lot of valuable information on many topics related to Basques and their Diaspora. I noticed that some parts are written in English, others in French, others in Basque or Spanish. Do you envision a site fully available on all four languages?

Our website, 8 Probintziak, only wishes to provide information. We don’t want to overlap with other sites, we just want to bring together existing information into one website. It’s a way to offer our readers an easy way to find the information they are looking for.

Q. Anything else you would like people to know.

Our main goal is to do things we think must be done, not for money, but to help people. Nobody gets paid to work for 8 Probintziak; we are all volunteers. 8 Probintziak Elkartea is a non-profit association based in Bayonne – Lapurdi.

4 thoughts on “8 Probintziak, the radio station on Basque diaspora, is back”