In 1992, the City of Boise established a sister city relationship with the town of Gernika, in Bizkaia. The year before, Bar Gernika came out with their the first menu after it opened on June 21. And now, if a German group succeeds in their initiative, Gernika could be the new name of a street in Dresden. 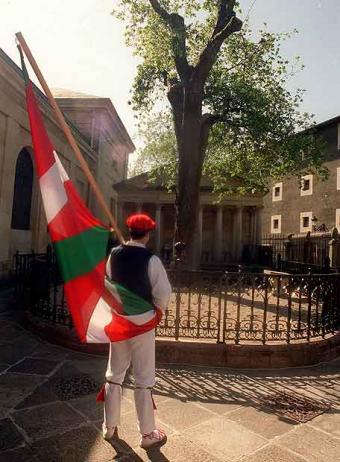 A representative from German association for historic memory and that country’s journalist Oliver Reinhard arrived yesterday to Gernika and will stay through Monday, in order to obtain support for an initiative to name a street in the German municipality of Dresden after the Biscayan town.

German group February 13 of 1945, whose name refers to the day Dresden was bombed, hopes to present this initiative once again during the city’s plenary session, after it was rejected on June 21.

The proposal, supported by the Green Party, was dismissed with votes against the government team, CDU, and FDP and NPD groups, even though it had been backed up by Gernika’s mayor, José María Gorroño and Peace Research Centre Gernika Gogoratuz (Remembering Gernika)

Despite the rejection, the association is expected to continue working to present it again in the future, according to the group Gernika Gogoratuz.

During their visit to Gernika, Matthias Neutzner, member of the German organization, and Oliver Reinhard will meet survivors from the Gernika bombing which took place on the 26 of April 26, in 1937, as well as with representatives from Gernika Gogoratuz and the Peace Museum in this town.

In these meetings, they will talk extensively about the town’s history, which was bombed on April 26, 1937 and has now become a “city for peace”, according to Gernika Gogoratuz.

(As always, please forgive any mistakes I might have made in the translation.)