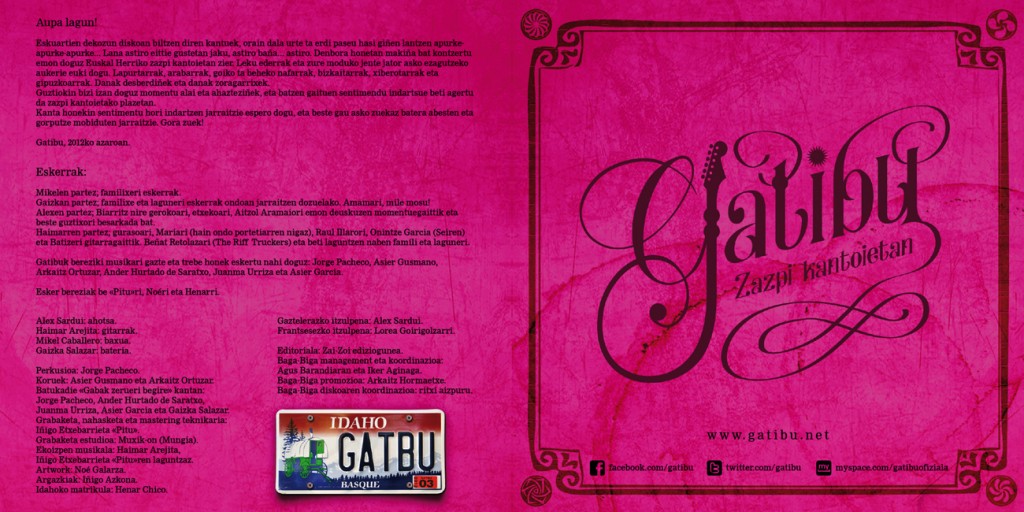 On November 9, we had a chance to preview Gatibu’s new single, Bixotza Suten. Now, the band’s fifth album in ten years, “Zazpi Kantoietan” (In Seven Regions), is available for purchase online at Elkar.com.

Gatibu’s lastest work includes seven songs with a mix of rock, disco, funk, country and acustic folk. If you are not familiar with the band, tomorrow, December 5, is your chance to get acquainted. On the occasion of the 47th edition of Durango’s Basque Books and Music Fair (December 6-9), a series of concerts have been lined up by Plateruena Kafe Antzokia featuring some of the best artists from the Basque Country, such as Gatibu, Bizardunak and Betagarri, as well as bertso singer Amets Arzallus, this year’s Iparralde’s Bertso Txapelketa winner.

Gatibu’s concert will take place tomorrow at 14:30 MST (22:30 Basque Country time), and it will be streamed online on EITB’s Gaztea channel.

On a personal note —I think by now everybody knows how much I like Gatibu— this album is very special for me. Haimar, Gatibu’s guitar player, asked for a photo of my Idaho license plate a while ago, and now “GATBU” will not only have roamed the States, but it will also tour many other places in the world!